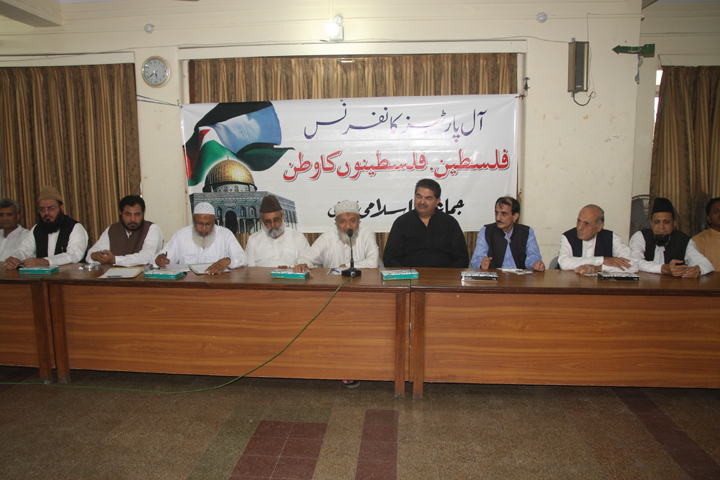 KARACHI – The leaders of Hezbullah (Lebanon) , Hammas (Palestine) and religious and political parties of Pakistan on Tuesday vowed that Armed struggle (Jihad) is the only way to eliminate the Israeli illegitimate occupation on the holy land of Palestine on holy places including Al-Quds.

These views were expressed by the leaders in the All Party Conference (APC) “Palestine: the land of Palestinians” held under the aegis of Jamaat-e-Islami Karachi chapter at the JI Karachi office. The APC was presided over by the Jamaat-e-Islami Azad Kashmir Chief Abdul Rasheed Turabi.

Speaking on the occasion, Turabi said that it was the armed struggle of Islamic groups in Palestine especially the Hezbollah, Hamas and others that the issue of Palestine emerged as the international issue.

occupation, he vowed that only JIHAD was the way to liberate the land of Palestine and Al-Quds.

He lauded JI for playing its role for raising voice and causing different political parties to stand united on international issues particularly those that pertained to the Muslims across the world.

Al-Quds Association of Lebanon Leader Dr Haider in his address said that the issue of Palestine was an international issue that called for immediate attention. He said that on more than 30 locations, the Israeli government had with force eliminated the signs of Islamic sacred importance. The Israeli government had with force deprived the Palestinians of their rights of potable water, food resources, health and education facilities and the Palestinians have been thrown into camp-life.

Addressing the APC, Pakistan Muslim League-N Sindh General Secretary Saleem Zia Advocate said that JIHAD was the only way to liberate the occupied land of Palestine for which, he assured, the PML-N leadership was fully prepared and supports the way of JIHAD.

Speaking on the occasion, JI Karachi chapter Ameer Muhammad Hussain Mahenti said that Palestine was the land of birth of several Messengers of Allah the Almighty. The Israeli occupation over the land of Palestine led to genocide of the Palestinian Muslims and they were the Palestinians that constituted the largest number of the immigrants a cross the world only because of the barbaric cruelty of the Israeli troops.

He also criticized the role of rulers of the 57 Muslim countries and Organisation of Islamic Conference for becoming subject to the dictation of the United States.

He said that the United Nations had passed 81 resolution son Palestine but the Israel had acted upon none of them, which was a big question on the UNO.

Mahfouz Yar Khan of Awami Muslim League in his address said that the issue of Palestine could only be resolved by way of Islamic JIHAD.

Spokesperson of Palestine Foundation, Sabir Karbalai in his address said that the issue of Palestine should not be confined to the issue of the Palestinians but it should be taken as the international issue of human rights.

The video message of Former foreign Minister of Hamas Dr Mehmood Al-zahar also telecasted in the APC on Palestine.JI Leader Muslim Pervez tabled a resolution on the issue of Palestine demanding immediate resolution of the issue was passed unanimously.

Another resolution was also passed on the condemnation of government of Myanmar over genocide of Burmese Muslim.