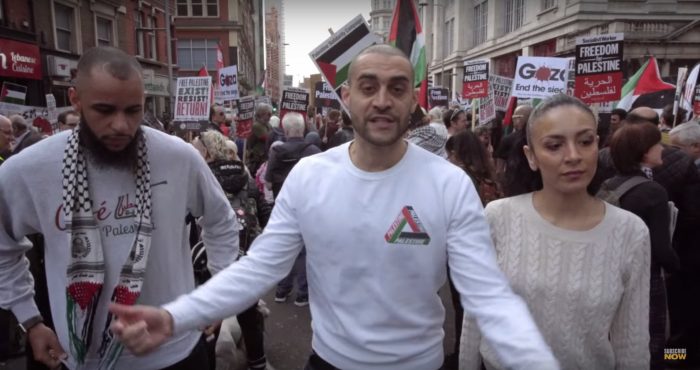 London – A pro-Israel group smeared the Brirish rapper and activists, Lowkey, before a planned visit to one of Britain’s best-known colleges.

On 15 March, Lowkey gave a talk via Zoom. The Palestine Solidarity Society arranged the talk at the Cambridge University.

The talk – titled “The Israel Lobby’s War Against You” – was supposed to take place on campus a week earlier.

The night before it was scheduled, however, the organizers contacted Lowkey and informed him the event had been postponed.

According to The Electronic Intifada, the postponement followed pressure exerted by the Cambridge University Jewish Society.

In an email message to the organizers of the talk, the group alleged he “has repeatedly used unfounded conspiracy theories and harmful arguments about ‘the Israel lobby.’”

It also claimed he has done this “to attack the British Jewish community.”

“..often in a way that undermines the lived experiences and realities of Jewish students.”

Moreover, the message claimed that Lowkey had dismissed “genuine complaints of anti-Semitism from British Jews.”

The message also depicted those complaints as “a sinister ploy designed to promote a certain agenda on Israel-Palestine.”

The group also accused Lowkey of arguing that the Israel lobby was “behind criticisms of anti-Semitism” in the UK Labour Party, when Jeremy Corbyn was its leader.

The Cambridge University Jewish Society is among around 70 groups that comprise the Union of Jewish Students (UJS).

The UJS makes plain its commitment to ‘Israel’ in its official constitution.

One objective of the group is “inspiring Jewish students to make an enduring commitment” to ‘Israel’, that document states.

In 2017, an investigation by Al Jazeera revealed that the Israeli embassy in London finances the UJS.

Asked for a comment, Lowkey said “I’m not surprised” that a group with strong connections to the Israeli embassy “came after me in this way,” The Electronic Intifada reported.

“..that yet again the Israel lobby is attempting to prevent pro-Palestinian, anti-apartheid perspectives from reaching uni campuses in the UK.”

“UJS, through the Masa Israel Journey program can serve as a gateway to the Israeli occupation forces.”

“The two programs it can connect members to are Marva and Tzofim Garin Tzabar which directly enlist teenagers into the Israeli army.”

The message from the Cambridge University Jewish Society argued that the rapper’s talk title “plays into a trope that Lowkey has employed against Jewish students.”

Yet it failed to back up the insinuation that Lowkey is hostile toward Jews in any way, The Electronic Intifada said.

Lowkey has a solid track record of opposing racism generally.

Pro-Israel lobbyists have long regarded Lowkey as an enemy.

This is because he has mastered an artform – hip-hop – popular among young audiences and sought to educate his fans about Palestine.