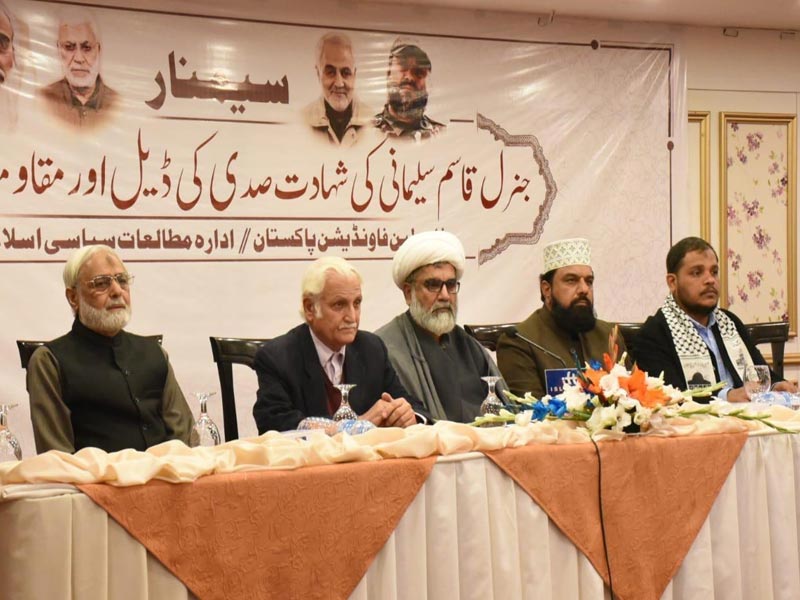 During the Conference a video message was played from the occupied Palestinian leader of Islamic Jihad Palestine Khalid al-Battash while Christian leader from west bank Attaullah Hanna addressed through audio.

Addressing the seminar, Senator Farhatullah Babar said that US President Trump and Israeli PM jointly responsible for the killing of Qasim Sulaimani and Abo Mahdi. Donald Trump’s move was aimed at gaining the support of the American nation in future presidential elections.

Paying tribute to Qasim Sulaimani’s courage, Farhatullah Babar said that as long as Qasim Sulaimani was alive, the United States did not have the courage to speak on the Deal of the Century. Qasim Sulaimani is the name of a resistant character. Iran is the only country that knows how to resist oppression and injustice. A plan was made to systematically enter ISIS into Pakistan. Iran and Qasim Sulaimani have played a key role in stopping ISIS ‘access to region and specially in Pakistan.

Addressing the seminar, Allama Raja Nasir Abbas Jafri, the central secretary general of the Majlis-e-Wahdat Muslim Pakistan, said that the United States had begun the Third World War. The Third World War is also the desire and need of the capitalist system. The century deal will fail and the existence of Israel will cease to exist. He said Iran was an important pillar of US security and interests during the Shah’s era. This pillar of the United States became weak after the Revolution of Iran. The United States knew that Qasim Sulaimani’s testimony would scare people into panic, but he soon realized his stupidity and confusion. Qasim Sulaimani is a name of a resistance that will be written in history with golden words. He said the Palestinian people were being tried in the name of the “Century Deal”.

Senior strategist and journalist Ayaz Amir said that Iran played a vital role in the success of the Muslims in Syria and the defeat of terrorist groups. After the martyrdom of Qasim Sulaimani, the strength and strength of Iran has increased significantly. The American claim of no casualties as a result of the Iranian attack on the US base is unrealistic. There were US troops at the base at the time of the attack. The Taliban have fought against the state, he said. In the last few years, there are only Muslim countries that have suffered the worst. Hezbollah is the best military in the world. He also praised Hamas’s role in defending Palestinian Muslims in Israel.

Addressing the seminar, Mufti Gulzar Naeemi emphasized on solidarity between the Muslims and emphasized the full support of Islamic resistance.

Speaking at the seminar, Palestinian Foundation Leader Sabir Abo Mariam said that Israel’s occupation of Palestine is a part of the Greater Israeli project. This move is contradicted by ground realities by US and world powers. History testifies that the inhabitants of any state protect their homeland more than their own. In the context of Palestine, Ammad Muginiya were views. Israel killed Ammad Muginia, paving the way for ISIS in Syria. The purpose of martyrdom of Qasim Sulaimani was to remove a strong barrier to keep the ‘century Deal’ project active.

Addressing the seminar, Institutional Studies political leader Sajjad Bukhari said that the military plan of the colonial forces against the Muslim Ummah could not weaken the resistance block, no matter how organized. The United States was not sure how much it would cost to target the fearless Mujahid Qasim Sulaiman of the Islamic world. Qasim Sulaimani was one of the biggest obstacles to the Muslim Kush policies in the Middle East. He said that the interpretation of America’s dream of the “Deal of the Century” would be very abhorrent.