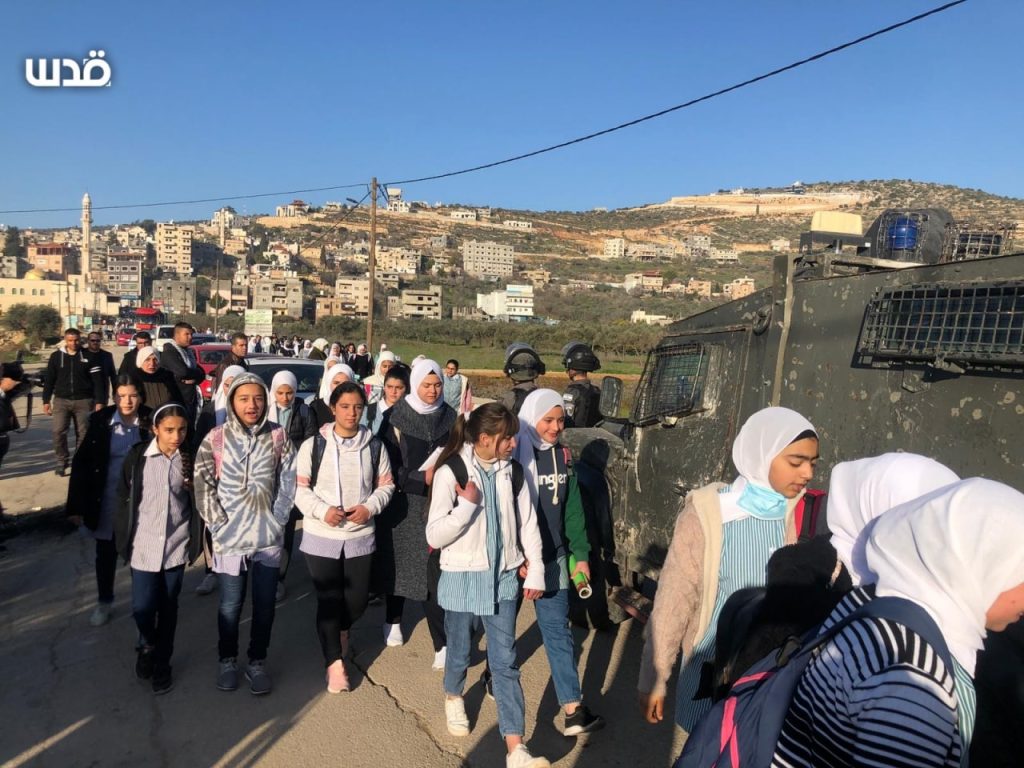 Nablus (QNN)- Dozens of Israeli settlers, backed by well-armed forces, obstructed on Wednesday morning access of Palestinian students to their school in Al-Lubban ash-Sharqiya village in Nablus in the occupied West Bank.

Local sources said dozens of colonial Israeli settlers, under the occupation forces protection, raided the village of Al-Lubban ash-Sharqiya and stationed at its entrance for the third day in a row.

The settlers and forces started harassing hundreds of Palestinian students and obstructed their access to their school.

The residents then decided to confront and protest the occupation forces and settlers’ violence in the village.

However, the forces fired sound bombs and rubber-coated metal bullets directly towards the residents and their children to disperse them.

The settlers also provoked the Palestinians by singing, dancing, and performing Talmudic prayers, under the occupation forces protection.

The forces also prevented journalists from documenting their attacks against the village residents and schoolchildren.

Israeli forces’ attacks against Palestinian students and residents of the village has increased lately.

Al-Lubban ash-Sharqiya is a home to about 3,500 Palestinians, 20km south of the city of Nablus in the northern West Bank.

Two illegal Israeli settlements, Eli and Ma’ale Levona, straddle the sides of the village and are built on land belonging to it.

Every afternoon, Israeli forces are stationed at the village’s entrance near the main highway between Ramallah and Nablus.

Nearby Israeli soldiers patrol on foot as groups of schoolchildren from Lubban attempt to take alternative routes to get home following numerous settler and forces attacks.

Parents are forced to drive their children to and from school every day because they are scared of their children being hurt or arrested by the soldiers.

The schoolchildren are also forced to take an alternative route through village fields to get home as Israeli soldiers patrolled the main road.

In May, a Palestinian man named Nidal Safadi was killed when settlers and Israeli soldiers raided the village and jointly shot him four times.

Thus, the residents of the village have decided to prevent Israel’s attacks against their schoolchildren and the village.