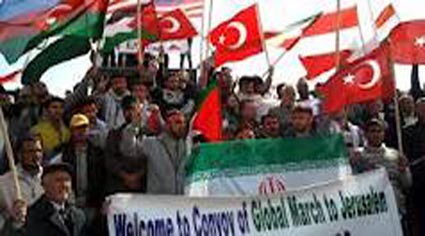 The Global March to Jerusalem-North America condemns the recent events leading up to and culminating in the Democratic National Convention’s botched vote to amend the party’s platform to declare Jerusalem as the “capital of Israel”. DNC rules stipulate that any amendment must receive a two-thirds majority at the convention in order to be passed; despite that it was clear to everyone watching, that the vote was evenly divided. Nevertheless, the DNC leadership ignored the voices within their own convention and passed the amendment regardless of not having a majority. This decision is a clear example of how under extreme pressure from President Obama, the Republican Party and AIPAC, DNC leaders were forced to amend their 2012 party platform to include text stating that Jerusalem is the capital of Israel even if it means acting against democracy and international law.
At the same time we wish to acknowledge and congratulate the roughly 50% of the convention delegates who voted against the amendment. These Americans were acting in the best interests of the United States and Middle East peace and in accordance with international law and formal US policy, which does not recognize Jerusalem as Israel’s capital and affirms that its status must be resolved through negotiations. Indeed we believe that this incident is an example of how the US elite, from whom both the Republican and Democratic Parties take their orders, decide foreign policy in the Middle East regardless of the interests or wishes of the American people. In addition, it demonstrates that US relations with Israel trump the democratic rights of Americans, not to mention the democratic aspirations of the Palestinian people. We also regret that the US mainstream media does not see fit to cover these events more fully.
The GMJ-NA supports the policy of the United Nations that the state of Israel illegally occupies Jerusalem and all other Palestinian land. We note that no country in the world recognizes Jerusalem as the capital of Israel and no country has its embassy in Jerusalem. Six United Nations Security Council resolutions on Israel have declared that Israel’s claims to the city are invalid. United Nations General Assembly resolution 63/30 of 2009 calls on Israel to halt its “illegal and unilateral measures” regarding Jerusalem.
US actions should support, not undermine, international law and policy. The Democratic Party delegates who voted against this amendment were acting upon this clear and sound principle.
Watch the video of the vote:  http://www.youtube.com/watch?v=cncbOEoQbOg&feature=youtu.be