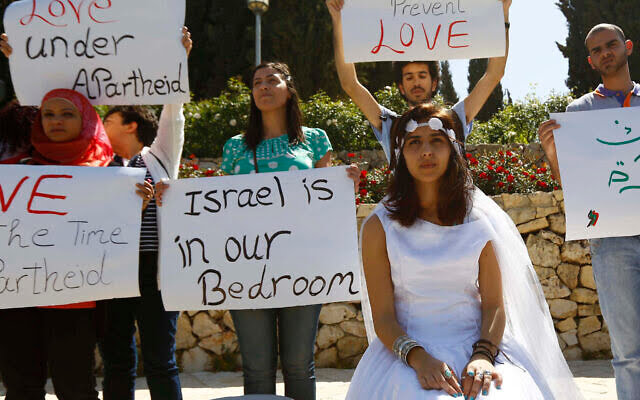 Occupied Palestine – Israel’s Knesset passed a law on Thursday effectively banning hundreds of Palestinian families from reuniting and living together.

The Knesset approved the so-called Citizenship and Entry into Israel Law (Temporary Order), 2022, by a 45-15 majority vote.

The law prevents Palestinians from the West Bank or Gaza who are married to Palestinian citizens of ‘Israel’ from permanently moving to ‘Israel’.

‘Israel’ claimed the law was passed for security reasons.

Following the vote, the Israeli occupation interior minister Ayelet Shaked claimed the law came for the “ security of the state.”

“The combination of forces between the coalition and the opposition led to an important result for the security of the state and its fortification as a Jewish state,” she claimed.

She later tweeted, “A Jewish Democratic country – 1. A state of all its citizens – 0.”

Bezalel Smotrich, head of the Religious Zionism alliance in the Knesset, said that the law was “a correct and good outline”.

Simcha Rothman, another right-wing lawmaker from the party, said, “The State of Israel is Jewish and so it will remain.”

It came to prevent Palestinians of the West Bank and Gaza from gaining residency or citizenship through marriage to a Palestinian citizen of ‘Israel’, or a resident of East Jerusalem.

Israel’s Palestinian Arab population is targeted with 65 different government laws and regulations, according to Adalah.