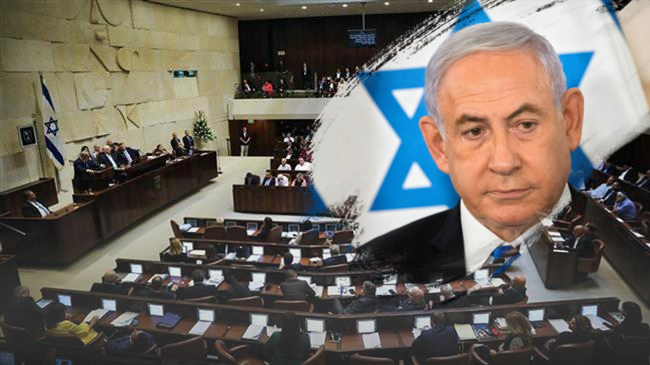 Knesset speaker Yariv Levin made the announcement on Tuesday, saying Israeli lawmakers would vote on the formation of the new cabinet during a special session of parliament on June 13 and the coalition would be sworn in on the same day if the vote passes.

The possible vote of confidence for the coalition cabinet would officially oust Netanyahu as premier after 12 consecutive years of being in power.

Israeli media reports on Tuesday suggested the new cabinet would submit to Knesset several proposals, including legislation that could impose a two-term limit on the premiership.

Last week, Israel’s centrist opposition leader Yair Lapid announced that he had succeeded in forming the coalition of “change” aimed at ending the long-serving Israeli prime minister after a March election.

The coalition — an amalgamation of left-wing, liberal, rightist, and religious parties — has since been under fire from Netanyahu, who has warned that the partnership was one of “a dangerous leftist.”

Naftali Bennett and Ayelet Shaked, the leaders of the right-wing Yamina alliance, which very recently joined the newly formed coalition, as well as other coalition politicians and their supporters have allegedly received threats from Netanyahu backers, prompting police to ramp up their security.

Israel’s right-wing groups are angry at Bennett, who is slated to replace Netanyahu in a power-sharing deal with Lapid, as he had promised before the election he would not join any party in a coalition.

Under the deal, Bennett will serve as prime minister for the first half of a four-year term, and then Lapid will take the helm in the second half.

The power-sharing pact came after an inconclusive election on March 23 that saw no parties winning a majority. It was the fourth election in Israel in two years.

Netanyahu’s popularity has suffered a deadly plunge among the Israelis, who have been holding regular rallies outside his residence for months on end to force him to resign.

The far-and-wide resentment is owed in part to the 71-year-old’s indictment in a number of corruption cases as well as his mishandling of the economy and the COVID-19 pandemic.