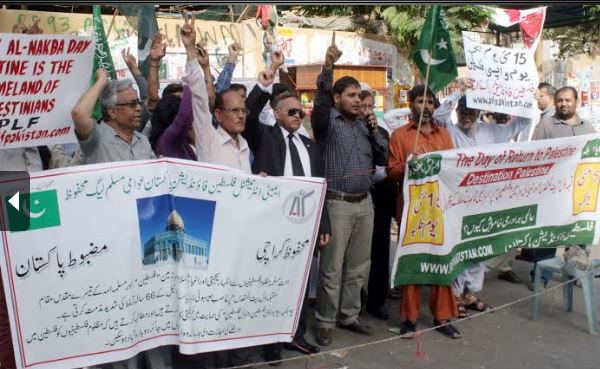 The human rights activists, civil society and political workers joined a largely-attended rally staged by the Palestine Foundation (PLF) Pakistan outside of Karachi Press Club on Wednesday to mark the anniversary of Nakba Day 1948.

Amid the slogans of Death to Zionist Israel and down with U.S.A., the speakers excoriated the Zionist regime of Israel, United States and United Nations for denying the oppressed Palestinians legitimate inalienable rights. They criticized the Arab League and the OIC for their criminal silence and inaction against the Zionist attacks on Palestinians.

They reiterated that the Zionist terrorists of Hagana, Irgun, Stern, etc., grabbed the sacred land of Palestinians and imposed an illegitimate state of Israel on them by massacring them and forced them to leave their homeland in May 1948 and that day was called Nakba Day in the history of Palestine.

They demanded the UN, EU, Arab League and the OIC to take practical steps to ensure that a sovereign and independent state of Palestine become reality and the sacred al-Quds should be its capital. They urged them to wipe illegitimate state of Israel by revoking their membership from the United Nation in order to end the 66 years long injustice done to Palestinians.

They reiterated their demand that all Palestinians should be allowed to return to their homeland and settle into those houses and localities from where they were forced to leave by the Zionist terrorists.