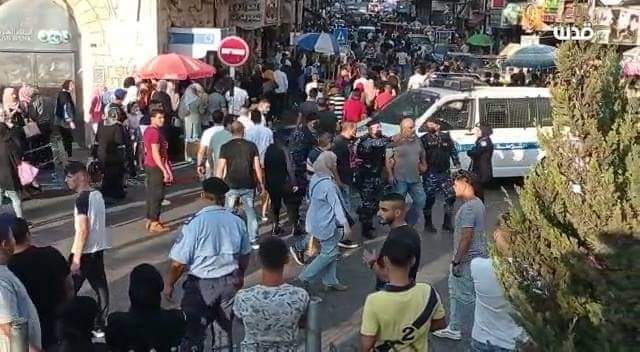 Ramallah – Several Palestinians were arrested yesterday by the Palestinian Authority for participating in a protest in Ramallah against the PA’s killing and assassination of Nizar Banat last June.

At least 21 Palestinians, most of them intellectuals, activists and former prisoners in Israeli detentions, were arrested on Saturday night by the PA’s forces following their participation in a protest in al-Manara Square in central Ramallah against the killing of Nizar Banat, an outspoken critic of the PA who had intended to run in parliamentary elections before they were cancelled earlier this year.

The protestors called to conduct a comprehensive investigation into what happened and to ensure that those responsible for Banat’s death were punished.

Among those who were arrested by the PA forces, is Maher Al-Akhras, who was released last November from the Israeli jails after entering a hunger strike for 103 days.

Al-Akhras was brutally assaulted by the PA forces during his arrest yesterday as he was rushed to the hospital to get medical treatment.

In response, the families of those who were arrested have been protesting at the PA headquarters since last night against the PA’s arrest of their sons, calling to release them.

Nizar Banat’s killing by Palestinian Authority forces has been met with anger on the streets and condemnation from Palestinian factions and human rights organizations.

Earlier in June, Banat was killed by the PA forces as his health deteriorated when a force of the security services went to arrest him from his home.

It said he was taken to a hospital where he was later announced dead, as around 25 Palestinian security forces stormed the home where Nizar was staying, blowing out doors and windows, beating Nizar with an iron bar and sprayed pepper spray in his eyes before undressing him and dragging him away to a vehicle.