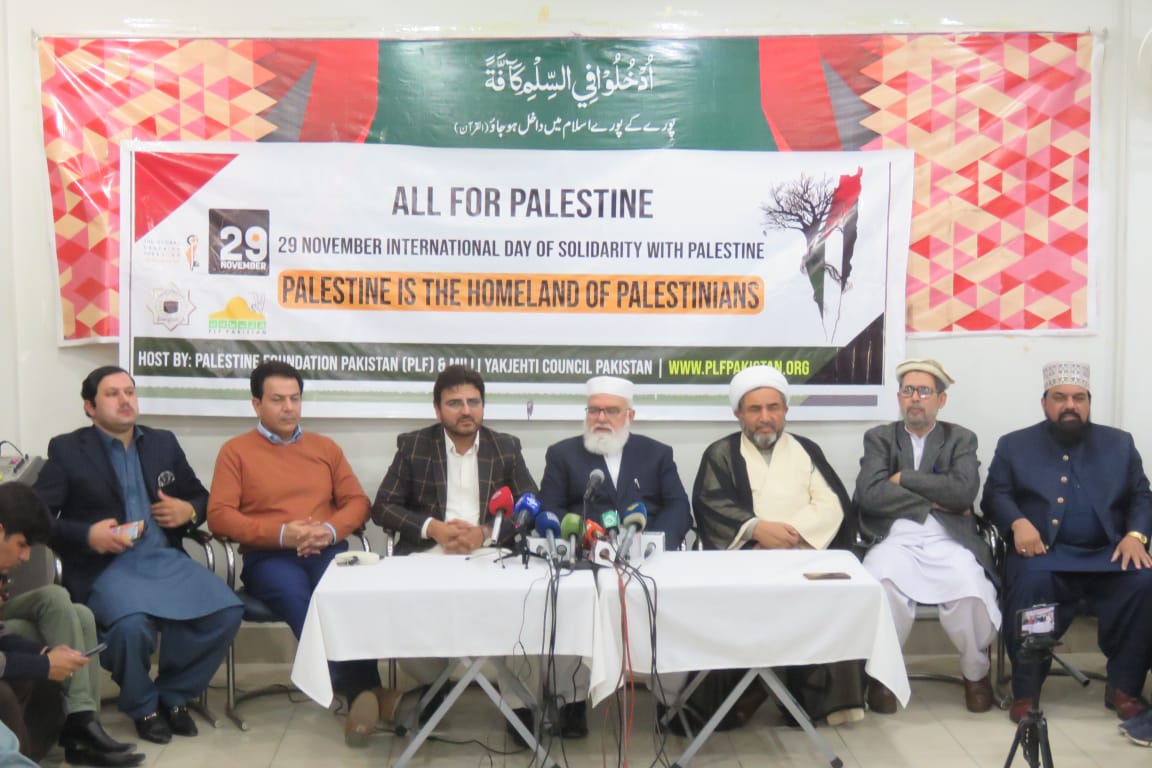 Islamabad (PLF NEWS) Addressing a press conference organized by Palestine Foundation Pakistan, the leaders of the Milli Yakjehti Council of Pakistan said that declaring November 29 as Palestine Day by the United Nations was tantamount to betraying the world. Resolution 181, passed on November 29, was to deprive the Palestinians of their right to a state and to ratify the illegitimate state of Israel.

These views were expressed by Jamat Islami leader Liaquat Baloch, Secretary General,, while addressing a press briefing under the weeklong campaign of Palestine Foundation Pakistan .

He said that the announcement of November 29, 1947, was rejected by the Muslims at that time and even today the entire Muslim Ummah does not accept any two-state solution in the Palestinian territories. He said that Quaid-e-Azam Muhammad Ali Jinnah, Allama Muhammad Iqbal and other Pakistani leaders had repeatedly stated that Palestine belongs to Palestinians only. The purpose of establishing the United Nations was to give rights to the deprived, to restore human rights. However, this body has been slaved by the Western powers and it has disappointed the Nations. The same institution gave the status of legitimate state to the illegitimate state on November 29, 1947, which was at the behest of the Western powers.

Liaquat Baloch said that we believe that the position based on truth always achieves success. Today Palestinians are on the right side and success will be their destiny. He said that peace in the world today is possible only when the voice of the oppressed is heard. No resident of the Islamic world will remain silent on these issues. Liaquat Baloch said that the Muslim leadership has shown criminal negligence in resolving these issues.
Resolutions are presented, but it is very important to stop the hand of the oppressor. This is the responsibility of the United Nations in general and the Muslims in particular. He added.

Milli Yakjehti Council of Pakistan, an alliance of the country’s religious parties, declares today that we are with the Palestinians, Hamas, Hezbollah. We believe that the unity of the Ummah is the solution to our problems.

Addressing the press conference, Allama Arif Wahidi, Vice President of the Islamic Movement, said, “We are with the Palestinians. If all Islamic states take a stand, Israel cannot succeed in its ambitions.

Deputy Secretary General of the Council Saqib Akbar said that, Hamas, Muslim Brotherhood, Hezbollah who are standing for Palestine, we are with them.

Speaking at the conference, Deputy Secretary General of Majlis-e-Wahdat-e-Muslimeen Syed Nasir Shirazi said that the issue of Palestine is an issue of Pakistan and Islam and human rights have been violated here.

The conference was organized by Palestine Foundation.