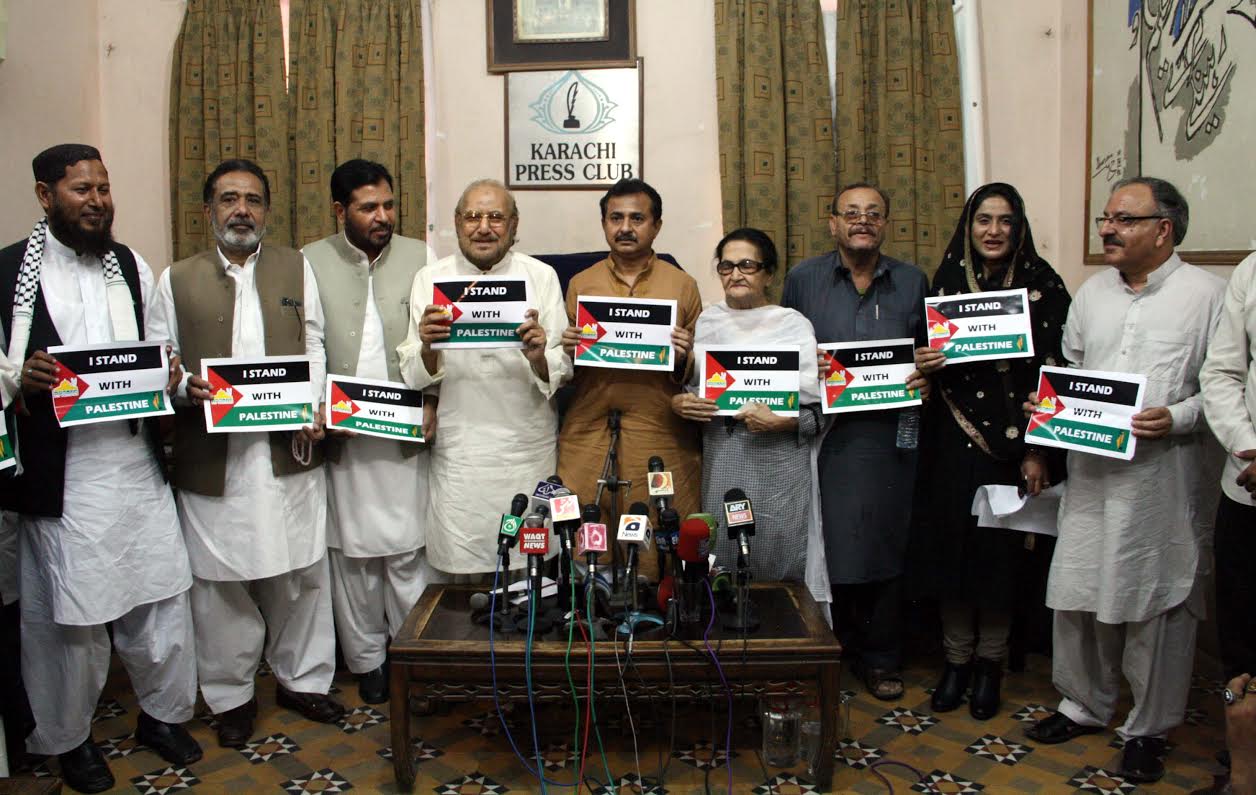 KARACHI- “Palestine Foundation Pakistan (PLF) will launch an anti-Israel campaign to express solidarity with the subjugated people of Palestine from 10th to 16th May across the country. The week-long campaign will be observed under the title of “Return to Palestine”.

The campaign is being launched on the eve of Yum-e-Nakba (Day of Catastrophe or Disaster), when 700,000 Palestinians were expelled from their homeland (Palestine) and they were forced to flee their homes.

This forced migration was taken place on 15th May 1948, and considered the massive in the history of human civilization. The US and British governments were the key player in term of helping Zionists to create their illegitimate state of Israel in Palestine.”

The US and British governments were the key player in term of helping Zionists to create their illegitimate state of Israel in Palestine.” The central leaders of the Palestine Foundation Pakistan expressed these views while speaking at the joint press conference held at Karachi Press Club here on Friday. Talking about the objective of this campaign, PLF leaders, including Former MP Muzaffar Hashmi (Jamaat-e-Islami), Allama Qazi Ahmed Noorani (JUP), Maulana Baqir Zaidi (MWM), Mehfooz Yar Khan (MQM & Amity International), Former President of Supreme Court Bar Association Rasheed Rizvi , Qaiser Iqbal Qadri (PAT), Karamat Ali of PILER, Former Advisor for Government of Pakistan Dr Alia Imam, Social Scientist Jameela Farooqi and Secretary General of Palestine Foundation Sabir Abu Maryam , said that PLF had planned to aware Pakistanis about this great historical tragedy so that a public opinion could be emerged against the continuous inhuman Israeli crimes against the helpless Palestinians. They condemned the genocide of oppressed Palestinian people by the Zionist regime, and said that the Israeli plans to setup more 900 Jewish illegal settlements had exposed the satanic land extension policy. “During the 1948 Palestine War, an estimated 700,000 Palestinians fled or were expelled, and hundreds of Palestinian towns and villages were depopulated and destroyed. These refugees and their descendants number several million people today, divided between Jordan (2 million), Lebanon (427,057), Syria (477,700), the West Bank(788,108) and the Gaza Strip (1.1 million), with at least another quarter of a million internally displaced Palestinians in Israel. The displacement, dispossession and dispersal of the Palestinian people is known to them as al-Nakba,” they said. Giving details about the campaign, they said that PLF would organize a peace walk in collaboration with Sindh Boy Scouts Association on May 10. “A protest against the Israeli crimes, jointly organized by Amnesty International, is scheduled to be held outside the KPC on May 11. The human rights groups and civil societies will also stage protests on May 12, 13 and 14 to denounce the illegal occupation of Israel on the land of prophets.The central protest will be staged on May 15 outside the Memon Mosque & Khoja Mosque where PLF leaders, representatives of different religious and political parties, lawyers fraternity will express their views on the bleeding international issue of Palestine. They said that every year, the Palestinian Arabs observe the day of Nakba on 15th May to condemn the establishment of Zionist regime, and its illegitimate, immoral and inhuman occupation in the name of Jewish homeland. The leaders of PLF urged the legislators, politicians, clerics, NGOs and the leaders of Muslim countries to voice against the atrocities of the Zionist state against the vulnerable Palestinians.