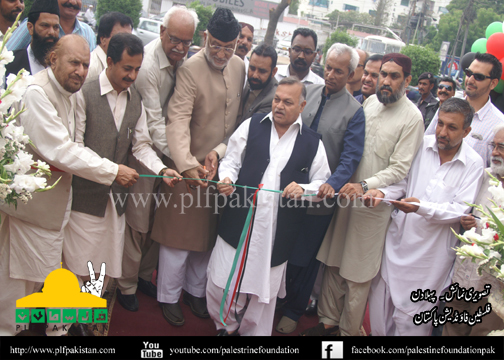 The leaders of political and reliogio-Political parties demanded of the government to announce the last Friday of Ramandan as National ALQuds day to support and highlight the issue of Palestine and condemned the illegal occupation of Zionist Israel on Palestine.

They appealed the Pakistani nation to participate in the ALquds rallies without any discrimination of color, races and sect saying that the people of Pakistan are with their Palestinian brothers and condemned the silence of world community over the Israel war crimes on Gaza,

The people from all walks of lives including civil society , doctors, students , engineers and others visited the pictorial exhibition of Palestine foundation Pakistan on first day of its inauguration.

The crimes of Israel in Gaza and the massacre of Palestinian oppressed people were highlighted in the exhibition via portraits and videos to aware about the people about the crimes of Zionist regime Israel with the support of America.