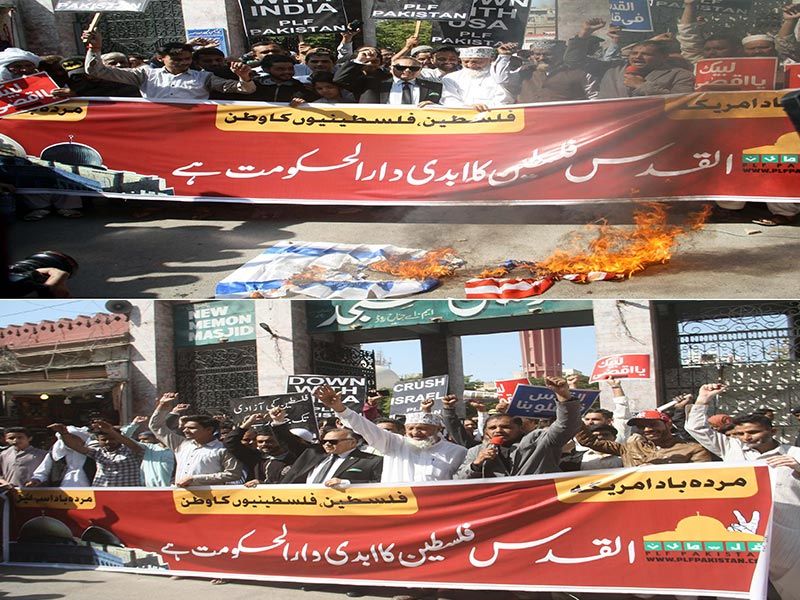 Karachi(PNIC) On appeal of Palestine Foundation Pakistan (PLF) Pakistani Muslims countrywide held a protest on Friday to condemn US President Donald Trump’s so called ‘Deal of Century’ vowing their support to the oppressed people of Palestine.

The protestors in their rally strongly denounced the US-Zionist nexus against the brave nation of Palestine.

Pakistan religious and political groups under an umbrella of Palestine Foundation Pakistan (PLF) flocked to the streets of southern city of Karachi after Friday prayers in support of the Palestinians.

They chanted slogans against the US and Zionist regime and torched their flags to express their anger.

The speakers addressing the protesters said the plan is open violation of international treaties and agreements and violation of basic human rights.

They said that some Arab countries have demonstrated criminal silence over the ‘Deal of Century’.

They called upon the government of Pakistan to raise strong voice at all international forums in support of the Palestinians to undermine the controversial deal.

US President Donald Trump in a meeting with Zionist Prime Minister at the White House on Tuesday announced his so-called ‘Deal of Century’.