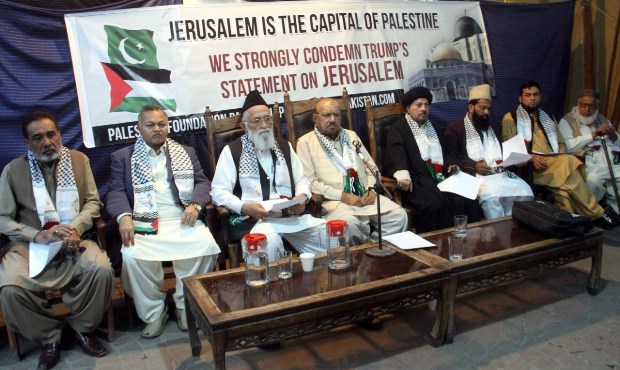 The day was marked with religio-political parties allied at a platform to resists Trumps decision against Palestine on the call of Palestine Foundation Pakistan (PLF-P) at Karachi Press Club on Wednesday.

PLF-P called on all parties to come forth in the cause of Trump’s new statement against Palestine. All at the conference were raged at Trumps call; usurping Jerusalem from the oppressed nation of Palestine, defying not only the statement but affirmed their resistance against any such verdict. Hundreds gathered at Karachi Press Club protesting the decision and calling for governments involvement to take heed of Trumps statement.

The parties read out the decree made in Jakarta Declaration, affirming to adapt the same in this dire time. They distributed the Declarations’ pamphlets among the audience and pledged to ensure its enforcement, taking it a step further.

Many a dignitaries address the conference where people agreed to stand by the cause of Palestine at any risk.

Sabir Abu Maryam, Secretary General of PLF-P enlightened the conference members of the importance of Jerusalem in the region and its importance to the nation of Palestine. He said that OIC meeting in Turkey should take note of the fact that Jerusalem is a part of Palestine and should not only endorse this fact but as well enforce it.