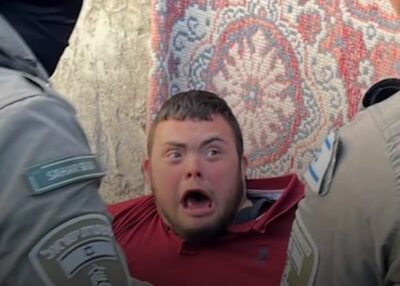 On Tuesday, Israeli soldiers attacked a Palestinian wedding celebration in the Sheikh Jarrah neighborhood in occupied Jerusalem before assaulting a Palestinian with Down Syndrome and detaining him.

A video released by Quds News Network shows the soldiers assaulting the terrified Palestinian shortly after he was clapping and dancing.

It added that dozens of soldiers invaded the wedding party and assaulted many Palestinians, including Mohammad, before dragging him out to abduct him.

The soldiers also injured three Palestinians, including one woman, before the Palestinians forced them to leave.

Palestinian medics provided the needed treatment to the wounded Palestinians and transferred Mohammad to a hospital in Jerusalem.

It is worth mentioning that dozens of families in the neighborhood face displacement from their homes for Israel’s illegal colonialist activities and are constantly subject to attack and serious violations by the soldiers and the colonizers.

Sheikh Jarrah remains the target of dangerously escalating Israeli policies aiming at demolishing homes and removing at least 75 Palestinian families from their homes in the neighborhood to replace them with illegal colonialist settlers.

On Tuesday night, Israeli soldiers killed a Palestinian child, identified as Mohammad Rezeq Salah Shehada, 14, in the Al-Khader town, south of Bethlehem, in the West Bank.