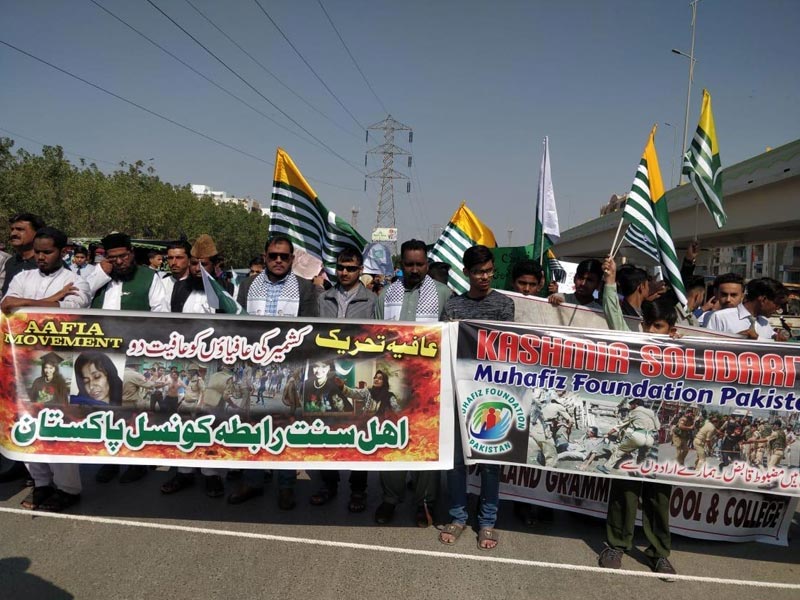 Speaking to the participants of the Solidarity Kashmir rally PLF Secretary General Sabir Abu Maryam said that all messengers of God teaches humanity to support oppressed people and stand against tyrant powers. He said that Palestine is the heart of Islam and Kashmir is the backbone of Pakistan.

He added that India and Israel have brought the region to the brink of war to carry out vicious plans of US imperialism.

Sabir Abu Maryam described the so-called peace plan presented by US President Trump as a catastrophe for the world, saying that the American face has appeared in front of the world.

The United States is the enemy of the people of Palestine and Kashmir. US is fully supporting massacare of Palestinians by Zionist regime and Kashmiris by Indian Hundreds of school students and students attended the solidarity Kashmir rally.

Sabir Abu Maryam mentioned the current situation in Kashmir, including the US and Zionist conspiracies in the region, while deliberating on the deal of century and the unclean ambitions of Zionist forces operating against Pakistan. On the need to understand the difference between the two countries and to expose the betrayal by the global imperialist forces with Palestine and Kashmir.

The solidarity Kashmir rally was attended by a large number of scholars and school students, including Allama Masur Hashmi, Allama Akram Sialvi and Mufti Shahid Qadri.