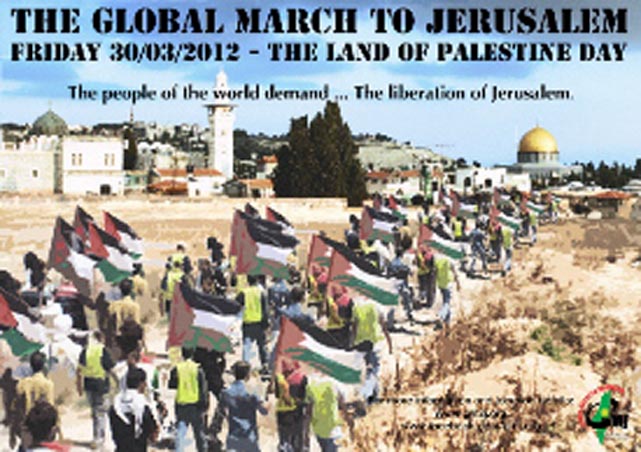 Some will say that the Global March to Jerusalem (GMJ) on March 30, 2012 was a great success.  Others will say it was a failure.  Both are correct. To measure by the standard of how many participants marched into Jerusalem on that day, no one can argue for success.  Neither can one argue that any fewer Palestinians are living in exile, or that the Palestinian population of Jerusalem or any other part of Palestine is under any less threat of expulsion or abuse of rights as a result of the march.  In sum, the situation on the ground has changed hardly at all.

However, even Israel’s main advisor for strategic studies, the Reut Institute, contends that the major threat to Israel’s existence is to be found in the hearts, minds and will of the world’s peoples, and that the struggle will be won or lost there, much as it was with South Africa.  When judged by this standard, the GMJ has proven its success, by virtue of its creation of an entirely new coalition, with a broad range of partnerships that has never existed before, and a major new center of nonviolent resistance for Palestine.
This coalition, in partnership with Palestinian Land Day commemorations, turned out hundreds of thousands of participants in scores of locations across the globe.  The largest were in Jordan and Morocco, with a combined total of nearly 100,000 between them.  In addition, a dozen nations participated in an inspirational – though sometimes grueling – caravan to Jerusalem, beginning in India and proceeding through Pakistan, Iran, Turkey, Syria and Lebanon.
The key to the breadth and diversity of the coalition has been its tolerance of a variety of narratives united by a common mission and set of principles.  Groups and individuals that have never before worked together agreed to do so despite sometimes wide differences in approach and messaging.  The result has been a learning experience for all concerned, and an increased appreciation for new points of view, as well as for the common concerns that bind the groups together – in this case the defense of Jerusalem and Palestine against ethnic cleansing, and of Palestinians against human rights abuses.
Admittedly, there is much room for improvement.  Although the movement remained true to its requirement that no individual or group should be excluded if they accept the mission statement and principles, invitations were not always extended equitably, so that some may have been unsure whether they were welcome or not.  They are, and it will be necessary to do a better job of outreach.  In addition, even though the GMJ has sought to remain above party affiliations, in some cases grassroots organizing was in the end compromised by party organizations that chose to profit from the momentum of the movement rather than support it for the sake of the Palestinian people as a whole.
The principle of non-exclusion was also severely tested.  From the beginning, many groups and individuals based their decision to participate upon review of the other participants and endorsers.  If certain ones appeared or failed to appear on the list, they might refuse.  This often encouraged a wait-and-see attitude that slowed organizing efforts.  It also led to self-fulfilling concerns, such as under-representation by groups who were afraid that their interests might be under-represented.  Nevertheless the organizers staunchly refused to exclude anyone for strategic reasons or to discourage participation from or endorsement by anyone.
The result is that hundreds of groups from scores of countries endorsed and participated in the organizing and decision-making.  At the center of the new alliance is a combination of groups that count hundreds of thousands or millions of Palestinian, Arab and Asian constituents, using new and innovative nonviolent resistance techniques, in addition to the more established network of smaller nonviolent resistance groups in Palestine that is better known to western solidarity groups.  The combination of these efforts means that an unprecedented unification of Palestinian and solidarity groups has formed, which can be the basis for new and powerful challenges to the genocidal intentions of the Zionist dream, hopefully vindicating the concerns of the Reut Institute and its Israeli government client.