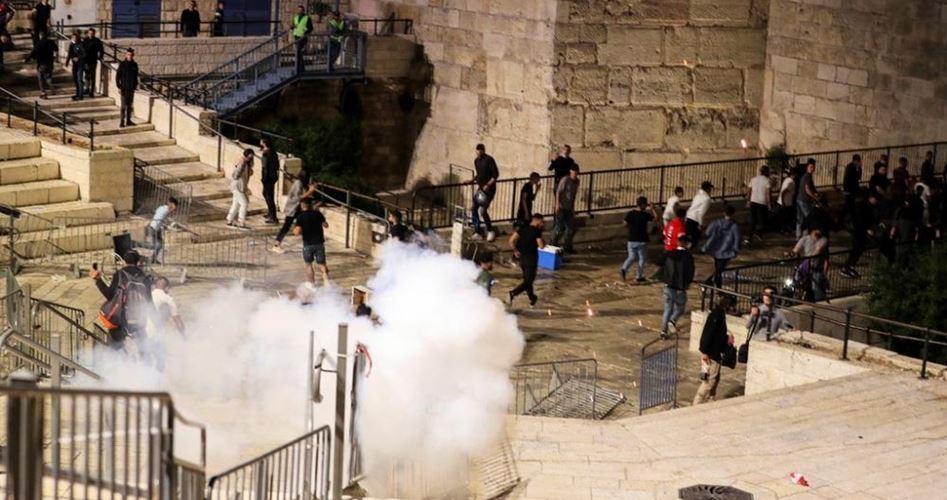 OCCUPIED JERUSALEM (PNIC) The streets of Occupied Jerusalem witnessed violent confrontations on Thursday evening between rioting Jewish settlers backed by the occupation police and Jerusalemite young men. Dozens of Palestinians were injured in the clashes.

The Palestine Red Crescent said that the latest statistics of clashes in the vicinity of the Old City in Jerusalem amounted to 105 injuries, of which 21 were taken to hospital for treatment, one of whom was hit in his head.

It added that the injuries recorded on the tenth day of Ramadan were described as moderate to minor.

The Israeli police fired stun grenades and rubber bullets at the youths while the Israeli mounted police forces chased citizens in the Sultan Suleiman and Nablus streets and sprayed them with wastewater.

Meanwhile, the settler extremist “Lehava” organization called for a demonstration at the Bab al-Amud.

On Thursday evening, the occupation police arrested 44 Palestinians, including minors.

Jerusalemite sources reported that an Israeli soldier was hit in his face during clashes with Palestinian youths in the vicinity of Bab al-Amud.

In another development, dozens of settlers attacked several Jerusalemite homes close to the settler demonstrations near the al-Khalil Gate and in the Old City.

Videos posted by activists on social media showed settlers firing at the Jerusalemite citizens, while the Israeli police were content with watching.

Local sources reported that the Israeli policemen forced Jerusalemites and Muslim worshipers out of the Al-Aqsa Mosque and threatened those not complying with arrest.

At dawn Friday, the Israeli police closed the Bab Hatta, one of the main gates leading to the Al-Aqsa Mosque, and prevented worshipers from entering it to perform the dawn prayers.

Hundreds of Jerusalemites gathered in front of Bab Hatta and forced the occupation police to open it after removing the barriers.

Buses carrying Palestinians from Umm al-Fahm city and several cities of the 1948 occupied lands arrived in Occupied Jerusalem to participate in defending the Al-Aqsa Mosque and supporting the Jerusalemites.

This comes amid calls for performing the Friday prayer at the Al-Aqsa Mosque to protect it from the aggression of the occupation and settlers and to confirm the sovereignty of the Muslims over the holy Islamic site.