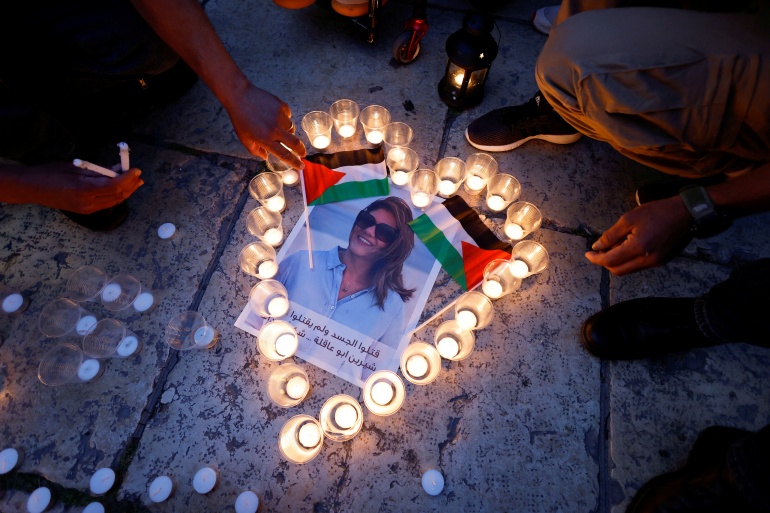 Washington – 11 Democrats introduced on Tuesday night a legislation that would force the FBI and the State Department to investigate Israel’s killing of Palestinian-American journalist Shireen Abu Akleh and determine whether US weapons were used to kill her.

The proposed congressional legislation was spearheaded by Indiana representative Andre Carson, and submitted as an amendment to the National Defense Authorization Act (NDAA), the annual bill that authorizes Pentagon spending and helps set US military policy, the Jewish Current first reported.

“The killing of Al Jazeera reporter and fellow American, Shireen Abu Akleh, was not only a tragedy; it was an affront to press freedom and to all Americans. We need answers and accountability from the Israeli government,” Carson told Jewish Currents in a statement.

The legislation was introduced one day after the State Department, in its first statement attributing blame for Abu Akleh’s killing, concluded that Israeli occupation soldiers likely killed the journalist.

The department based its conclusion on the work of the US Security Coordinator, an official stationed in Israel/Palestine, who examined the bullet said to have killed Abu Akleh—which US officials said was so damaged they couldn’t determine its provenance—and reviewed the Israeli and Palestinian probes into the killing.

Carson, a frequent supporter of Palestinian human rights in Congress, and his colleagues—including Reps. Rashida Tlaib, Alexandria Ocasio-Cortez, Ayanna Pressley, Cori Bush, and Betty McCollum, among others—are now attempting to escalate pressure on the Biden administration over the killing.

In the same context, Tlaib issued a statement on Friday slamming the State Department examination, saying “when an American citizen is murdered abroad, it is typically standard procedure for the U.S. to open a criminal investigation. But in this case, the State Department and the Biden Administration have yet to launch an independent U.S. investigation, led by the FBI, into Shireen’s murder, as was demanded by more than 80 Members of Congress in separate letters to the Biden Administration. Instead, they admit that Shireen was likely killed by Israeli forces, but extend the benefit of the doubt to a government that has earned none.”

Tlaib added, “The Israeli military spokesperson Ran Kochav described the group of unarmed journalists with her as “armed Palestinians. They’re armed with cameras, if you’ll permit me to say so.” Not only is this objectively a lie, it also clearly demonstrates what millions of everyday Palestinians already know.”

“In the eyes of the Israeli occupation forces a camera is just as dangerous as a gun, because cameras expose the uncut, brutal reality of their apartheid regime and its racist oppression.”

“This much is clear – the State Department has comprehensively failed to carry out its mission as it relates to the murders of an American citizen. This failure sends a clear message to the world: some American lives are worth more than others, and some “allies” have license to kill with impunity,” she stated while calling Biden to “obtain the names of the soldiers responsible for killing Shireen, along with that of their commanding officer, so that these individuals can be fully prosecuted for their crimes by the Department of Justice.”

The family of Abu Akleh on Friday also urged Biden to meet with it and provide it with all of the information gathered by US administration concerning Shireen’s killing during his upcoming trip to the region as he is expected to visit ‘Israel’, the occupied West Bank and Saudi Arabia between July 13-16.

The family also demanded to provide it with all of the information gathered by the Biden administration to date concerning Abu Akleh’s killing, “including any evidence reviewed and assessed by U.S. officials, the identities and qualifications of all individuals present during the latest review of evidence, any forensics reports or other information that has not been provided to us or our legal team.

Despite wearing a protective helmet
and blue bulletproof vest clearly marked as “PRESS,” the 51-year-old journalist was shot and killed by Israeli forces in the head while she was covering an Israeli military raid into the Jenin refugee camp on May 11, sparking international outrage and calls for accountability for attacks on journalists. The slain journalist covered events and Israeli aggressions in the occupied Palestinian territory for 25 years.

On June 24, the UN’s OHCHR also announced that information it had gathered showed that the bullets that killed Abu Akleh were fired by Israeli forces.

Spokesperson for the UN’s OHCHR, Ravina Shamdasani, told reporters in Geneva, “All information we have gathered is consistent with the finding that the shots that killed Abu Akleh and injured her colleague Ali Sammoudi came from Israeli security forces and not from indiscriminate firing by armed Palestinians.”