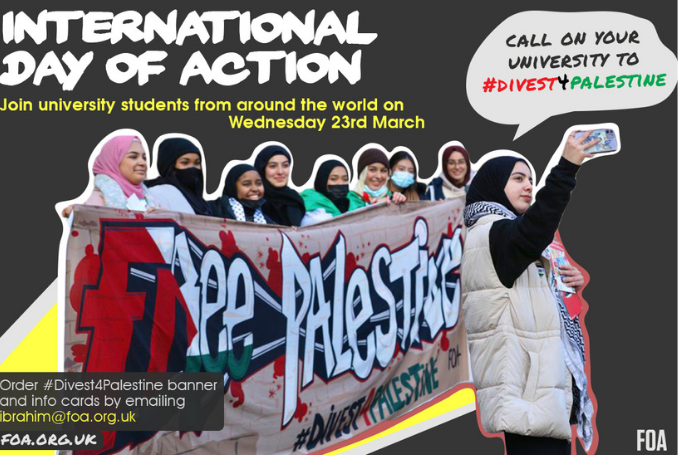 As part of the build-up of the International Day of Action, which will take place next Wednesday, 25 prominent academics have signed an open letter to universities worldwide calling on them to divest from Israel in solidarity with the Palestinian people.

The open letter, a copy of which was sent to The Palestine Chronicle, has been coordinated by the UK- based solidarity group Friends of Al-Aqsa (FoA) and a coalition of university student societies across the UK.

“In the last few weeks, we have seen boycotts, divestment from and sanctions on Russia for its invasion and occupation of Ukraine. Individuals and companies have boycotted Russian goods, and governments have imposed extensive sanctions on Russia in response to its actions,” the letter reads.

“We call on our institutions to take action and divest for Palestine. We have now seen what can be achieved when we unite against those who break international law, and we must do the same for Palestine,” the academics wrote.

On Wednesday, March 23, students at universities across the world are expected to hold demonstrations on campus and message their Vice Chancellors, calling for a full withdrawal of investments in companies complicit in the illegal occupation of Palestine.

To read the full text of the letter, please click here.