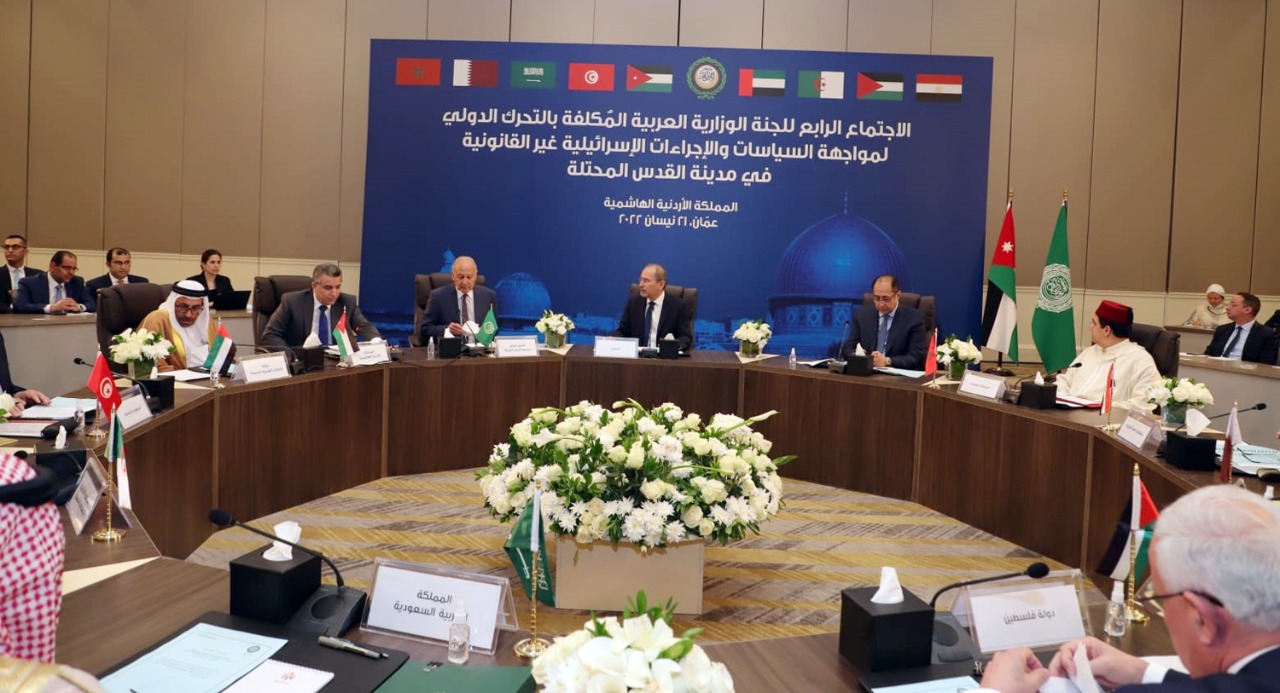 Amman – The Arab Ministerial Committee in charge of international action to confront illegal Israeli policies and measures in the occupied Jerusalem on Thursday discussed means to address the “dangerous Israeli escalation” in the al-Aqsa Mosque compound and joint action to stop the Israeli attacks and violations of the holy sites.

In a closing statement, the committee stressed the role of the Hashemite Custodianship, under the Jordanian King Abdullah II, in protecting the Islamic and Christian holy sites in Jerusalem and the historical and legal status quo.

It also underlined the need to remove all restrictions and obstacles that impede the Waqf (endowments) Administration from managing and preserving the compound.

Jordanian Minister of Foreign Affairs and Expatriates Ayman Safadi, Chairman of the committee, condemned the attempts to change the historical and legal status quo and restrict the freedom of worshipers.

He also highlighted efforts to stop the escalation, end the cycle of violence and restore calm.

The committee denounced the Israeli attacks and violations against worshipers in the al-Aqsa Mosque, which have gravely escalated over the past few days of the holy fasting month of Ramadan, leading to hundreds of injuries and arrests among worshipers, and severe damage to the facilities of the holy mosque.

It also warned that these attacks and violations are a blatant provocation against Muslims everywhere that undermine the freedom of worship in the al-Aqsa Mosque and worshippers’ freedom of access to it.

These attacks threaten to ignite a cycle of violence that threatens security and stability in the region and the world, the committee underscored.

The committee rejected all illegal Israeli practices aimed at changing the legal and historical status quo in the al-Aqsa Mosque, and any attempt to impose temporal and spatial division.

It condemned these practices as a “flagrant violation of international law, and of Israel’s responsibilities as the occupying power.”

It called on ‘Israel’ to respect the historical and legal status quo in the al-Aqsa Mosque and return to the status quo before 2000, in a manner that guarantees respect for the fact that the compound, in its entire area of 144 dunums, is purely a place of worship for Muslims.

It also called on the international community, especially the United Nations Security Council, to take immediate and effective action to stop the illegal and provocative Israeli practices in Jerusalem and the al-Aqsa Mosque and implement international resolutions related to the city of Jerusalem.

The committee underlined importance of continuing the coordination of efforts between the Arab League and the Organization of Islamic Cooperation to protect the occupied city of Jerusalem, preserve its Arab, Islamic and Christian identity, and increase Arab and Islamic institutional work to support Jerusalem and the Jerusalemites.

Moreover, the committee expressed its full support for the steadfastness of the Palestinian people, its leadership and institutions to defend Jerusalem and its holy sites, especially the al-Aqsa Mosque and their right to freedom and an independent and sovereign state on the June 4, 1967 lines with East Jerusalem as its capital, on the basis of the two-state solution under the international law and the Arab Peace Initiative.

It called on ‘Israel’ to stop its practices and aggressions in the occupied Palestinian territories, lift the siege on the Gaza Strip, stop all measures that threaten security and peace and undermine the two-state solution and the chances of achieving a just and comprehensive peace, which is an Arab strategic choice, and a regional and international need.

Additionally, it warned of the catastrophic consequences of the continued absence of political prospects and the economic pressure on the Palestinian people and the State of Palestine.