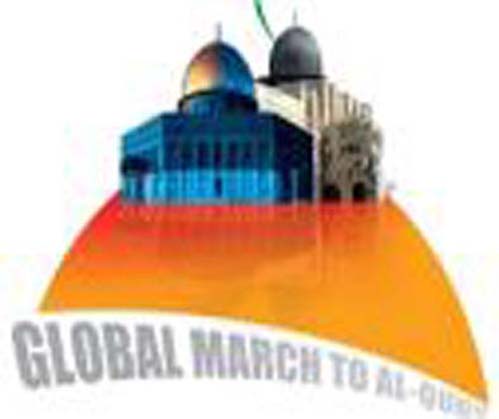 The Global March to Jerusalem – Asian Caravan arrived safe and sound, after a long journey late last night, March 20th, 2012 to the beautiful city of Tabriz located in Northwestern Iran.

The Global March to Jerusalem – Asian Caravan arrived safe and sound, after a long journey late last night, March 20th, 2012 to the beautiful city of Tabriz located in Northwestern Iran.  Prior to arriving in Tabriz, the group was received by many locals of the historical city of Zanjan, as well as the honorable Governor, Mr. Abbas Raashaad for dinner at the Zanjan Hotel. He warmly welcomed the delegates on behalf of the people and city officials of Zanjan City and wished success and prosperity for the group.

Prior to the arrival of the caravan to the city of Tabriz, GMJ – Asian Caravan inhabited Tehran, the capitol of Iran, for approximately four days. During this stay, the group met with prominent governmental officials including the honorable President of Iran, Dr. Mahmoud Ahmadinejad and the mayor of the city of Tehran, Mr. Mohammad Bagher Ghaalibaf. However, not only was the stay in Tehran filled with meetings and visits with city and governmental officials, rather the group also went on a short tour of various landmarks across the vast city of Tehran. GMJ – Asian Caravan also met with a delegation of Iranian artists, poets, students, and activists, some of which who also joined the caravan.

During the four-day stop in Tehran, mandatory meetings took place with all the delegates of the caravan in regards to the issue of acquiring the required visas for entrance to Turkey. The delegates gathered at the lobby of the hotel in which they were staying at each night with eagerness to hear that the visas had arrived. One day prior to the departure of the caravan from Tehran, the Turkish embassy issued visas for the entire group with the exception of the delegates from Pakistan and Afghanistan. As a result, the Pakistani and Afghan delegates remained in Tehran awaiting a resolution for this issue.