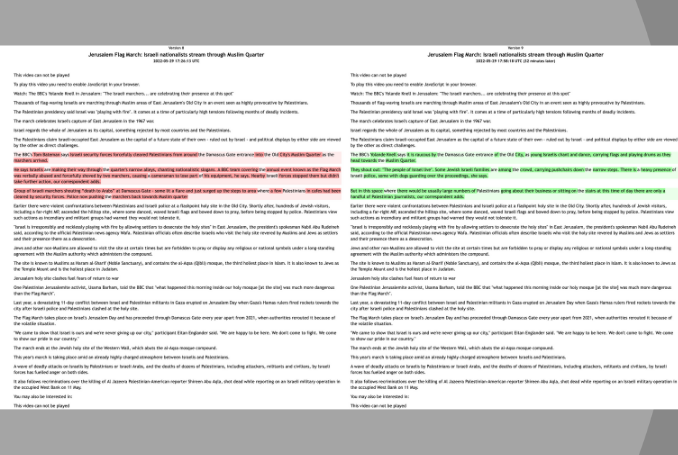 The BBC has come under strong criticism on social media for removing a section of its report which described how Israelis attacked its own production team and chanted “Death to Arabs” during this weekend’s ‘Flag March’.

The media monitor News Sniffer, which detects when articles are edited or altered in anyway, picked up on the BBC changing text on May 29 in its report “Jerusalem Flag March: Israeli nationalists stream through Muslim Quarter”.

The BBC’s  says  the Damascus Gate entrance into the Old

The BBC’s Yolande Knell says it is raucous by the Damascus Gate entrance of the Old City, as young Israelis chant and dance, carrying flags and playing drums as they head towards the Muslim Quarter.

They shout out: “The people of Israel live”. Some Jewish Israeli families are among the crowd, carrying pushchairs down the narrow steps. There is a heavy presence of Israeli police, some with dogs guarding over the proceedings, she says.

But in this space where there would be usually large numbers of Palestinians going about their business or sitting on the stairs at this time of day there are only a handful of Palestinian journalists, our correspondent adds.

On May 30, at 5:28 UTC, the same day a Tweet from Mnar Adley (Director of MintPress News) went viral as it exposed the BBC’s own editing, News Sniffer detected that the BBC had added the following footnote:

“Update 30 May 2022: Abusive chants and threats which were made by some marchers against Palestinians have been included in this version of the story, in order to give a fuller picture of events. The report of the assault on the BBC team, removed as the story was updated, has been restored.”

The BBC has received criticism online over the issue, including from investigative journalist David Sheen who tweeted:

“Someone at the BBC wants anti-Palestinian pogroms to continue and increase in size and strength, so it steps in to whitewash the worst of the worst, giving the lynch mobs carte blanche.”