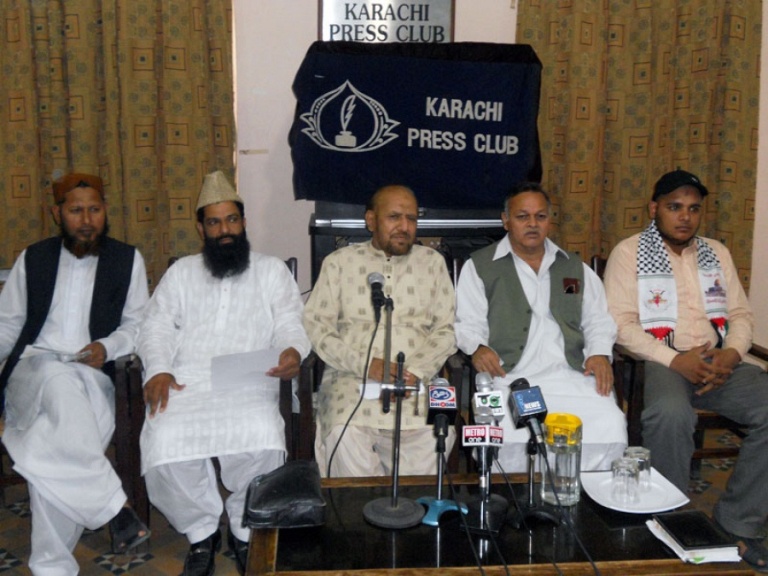 Baqar Zaidi, President of Amnesty International and a member of MQM Mehfooz Yar Khan Advocate, leader of Pakistan Muslim League (N) Molana Azhar Ali Hamdani and the Secretary General of Palestine Foundation Pakistan Sabir Abu Maryam expressed their thoughts in an urgent meeting of Palestine Foundation in face of continuous Zionist attacks on Qibla e Awal and said that these continuous Zionist attacks on Qibla e Awal have become a question mark for the whole Muslim Ummah. The leaders of Muslim Ummah have been in dead sleep whereas the enemies of humanity have increased their efforts and schemes for Jewization of Qibla e Awal. They said that these attacks on Qibal e Awal are intolerable and Muslim Ummah should strongly respond to Israeli extremism.

Leaders said that it is the responsibility of all true fighters and strugglers of the world, especially of Muslim leaders and scholars to make the international community aware of Zionist terrorists and illegal state of Israel and to stand up against continuous Zionist attacks on Aqsa Mosque and against razing of its sanctity. They should raise their voices at international platforms. They further said that the issue of Bait ul Muqaddas is the basic and most important issue of the Muslim world, Muslim and Arab leaders should liberate themselves from the slavery and it is the legal right of Palestinians to fight for their independence. The speakers condemned recent attacks on Gaza and expressed their belief that the US is the head and supporter of Israeli extremism and the founder of terrorism. They demanded all the countries to stop following and supporting the United States and should raise their voices against continuous Zionist attacks on Qibla e Awal and oppressed Palestinians. Speakers also condemned the UN for not focusing on Palestine issue during its 70thsession and said that the UN that was created to stop wars, has now become a helper in spilling the blood of oppressed in the whole world. The UN has lost its importance and utility and if it wants to maintain its standard then it should solve the most important issues of both the Muslim world and humanity i.e. Palestinian and Kashmir issues.