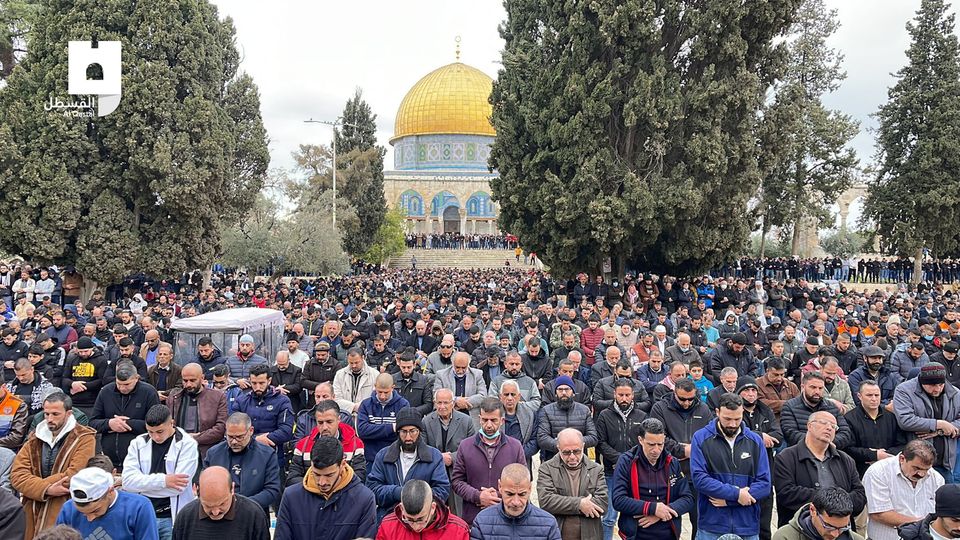 Local sources said that despite the Israeli restrictions, nearly 50,000 people performed the Friday prayer at the courtyards of the Al-Aqsa Mosque.

Earlier today, well-armed Israeli occupation forces obstructed the movement of dozens of Palestinians heading to the Al-Aqsa mosque, searching them, harassing them, and inspecting their ID cards

They also prevented dozens of Palestinians coming from the occupied West Bank from entering and praying in the holy site.

Hundreds of Israeli colonial settlers, backed by forces, organized a provocative march, earlier today, behind Bab Al-Mughrabi Gate, one of the Gates of the Old City of Jerusalem and is under full-Israeli control, and also danced in a provocative way at Bab Al-Qatanin area.

Every Friday, thousands of Palestinians stream to the Al-Aqsa mosque, the world’s third-holiest site for Muslims, to recite the Holy Quran before performing Friday prayer.

The occupation forces facilitate and protect the Israeli settlers’ incursions to the mosque which has been intensively allowed by the occupation authorities since 2003, despite repeated objections and warnings by the Palestinian religious authorities as the visits provoke worshippers of the mosque.