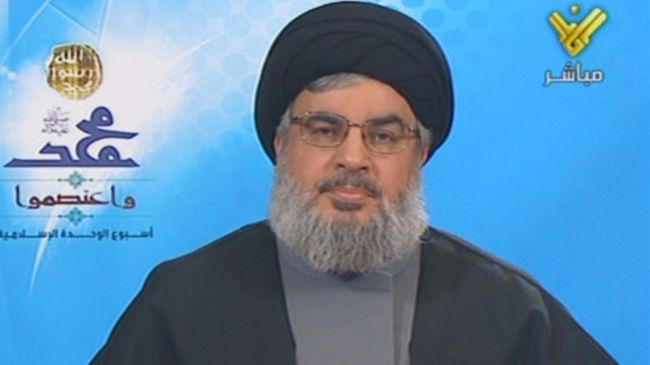 Hezbollah Secretary General Seyyed Hassan Nasrallah says dialog and reform are the only paths to resolve the Syrian crisis.
The leader of the Lebanese resistance movement said on Friday that Syria has promised reform and dialog, and that it is up to the opposition to take advantage of this opportunity.
Any solution other than this will not serve Palestine, but will only serve Israel, the US, and all who seek to fragment the region, he warned.
“The situation in Syria affects the whole region.”
In his televised address on the occasion of Land Day, Nasrallah criticized the Arab League for turning a blind eye to the crisis in Bahrain at Thursday’s summit in Baghdad, Iraq.
“The situation in Bahrain is not getting any international attention,” he said, describing the Bahraini regime’s crackdown on peaceful protesters in the country as “a real catastrophe.”
“Peaceful Bahraini protesters are being killed on a daily basis…the Bahraini regime uses poisonous tear gas against peaceful protesters…the Bahraini regime is deliberately killing women and children… [but there was] no word from the Arab League on the Bahraini regime’s crackdown,” he complained.
Nasrallah also criticized countries that are going with an Israeli agenda to push the issue of Palestine into oblivion, and praised the turnout at the Palestinian Land Day demonstrations.
“Israel wants Palestinians to lose hope and give up the right to return,” he pointed out. “They want us to forget Palestine and force its people to despair and resign to the fact that their land has been lost.”
He highlighted the significance of Palestinian attachment to their homeland, noting that “resistance has kept the Palestinian cause alive” and how “attempts by arrogant powers have failed to eliminate the resistance.”
Related Topics: