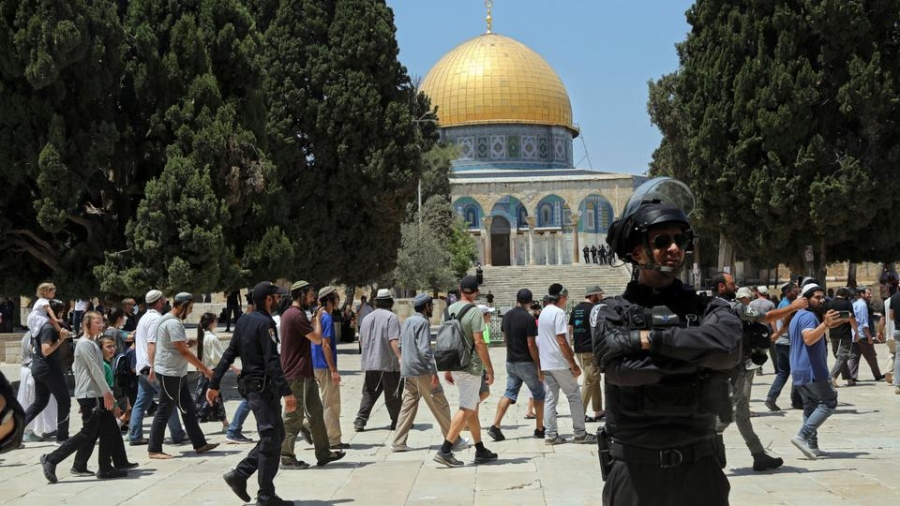 Al-Qastal, a Palestinian network hub for Palestinians in occupied Jerusalem, said dozens of Israeli settlers broke into the courtyards of Al-Aqsa Mosque during the morning break-in session, under the occupation forces protection.

More settlers are expected to break into the mosque’s complex in the afternoon.

The settlers entered through the Mughrabi Gate, one of the Gates of the Old City of Jerusalem and is under full-Israeli control.

They provoked the Palestinian worshipers by performing Talmudic prayers in the courtyards of the holy site ahead of the so-called the day of the “unification of Jerusalem,” which will take place on May 29 amid high tensions in the area.

The leader of the Israeli far-right group, Lehava, also called for the demolition of the Dome of the Rock Mosque last Wednesday.

Bentzi Gopstein, the founder and leader of Lehava, published the controversial post online in which he called on Israeli settlers to unite on “Jerusalem Day” on 29 May to break into Al-Aqsa and start dismantling the revered Muslim landmark and pave the way for building a third Jewish temple at Al-Aqsa Mosque.

“Jerusalem Day, which falls on 29 May, is the day the demolition of the Dome of the Rock will begin,” Gopstein wrote.

“Jerusalem Day” is an annual Israeli holiday celebrated on the 28th day of the month of Iyar in the Hebrew calendar, commemorating the city’s “unification” when the Israeli military occupied East Jerusalem in the 1967 Six-Day War and later annexed the Palestinian city in violation of international law.

The Lehava group published a poster on social media showing an excavator next to the Dome of the Rock. In another poster, another excavator appears to be carrying debris from the mosque.

On Sunday, an Israeli occupation court also issued a preliminary ruling allowing settlers to perform their Talmudic prayers “aloud” and to kneel during their storming of the Al-Aqsa Mosque courtyards.

In its decision, the court considered that performing the Shema Yisrael (translating to “Hear, O Israel”) aloud and kneeling on the ground inside Al-Aqsa Mosque, cannot be criminalised or considered a breach of civil peace.

In conclusion the court stated: “All residents of Israel are allowed to ascend to the Temple Mount and to practice their religious rituals.”

The court also overturned a police restraining order against three Israeli far-right settlers for praying at al-Aqsa Mosque, as last week, Israeli forces barred three Israelis from entering the al-Aqsa for 15 days after they performed Jewish rituals while being protected by forces.

The three appealed the ban to the magistrate’s court, which ruled in their favour.

The Sunday ruling comes a week after the Israeli occupation government approved the annual far-right “Flag March” to pass through Jerusalem’s Damascus Gate and the Old City’s Muslim quarter next Sunday.