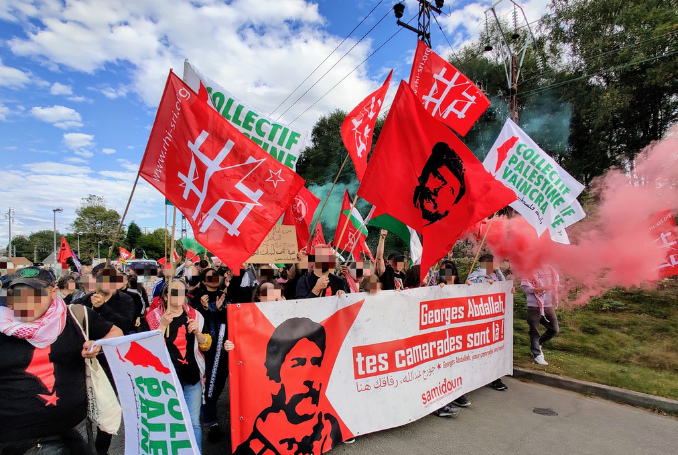 As a gift to the pro-Israeli lobby, the French government, through its Minister of the Interior Gérard Darmanin, has announced its intention to dissolve two Palestine solidarity organizations: the Collectif Palestine Vaincra and the Comité d’Action Palestine.

Long History of Harassment of the BDS Campaign

In line with the policies of most European Union countries, pressure groups and political authorities in France have never skimped on filing complaints and administrative bans. And this has been the case for more than 10 years, since the lawsuit brought against the BDS campaigners in Mulhouse, in the east of France. Since then, many collectives have been subjected to various forms of harassment, including those of Lyon, Toulouse, Bordeaux, Paris, Mulhouse, Colmar, Perpignan, and Montpellier (and the list is non-exhaustive).

The alleged arguments developed in this defamatory campaign invoke an alleged anti-Semitism, which constitutes the main angle of the Israeli attack against the international movement of solidarity with Palestine.

Throughout the years, these initiatives, aimed at suppressing any form of organized criticism of Israel, have been met with strong reactions, from a legal point of view, but also through grassroots mobilization and were almost always defeated in court.

But these repeated attacks are financially costly, can be morally exhausting, and require a lot of energy, which is then diverted into time-consuming and complex legal procedures.

Why Does France Attack Solidarity Organizations?

The reason behind these attacks is the solidarity, or deep connivance, between all the economic and political powers throughout the world and Israel. Tel Aviv is both the advanced point of Western domination in the Middle East and a laboratory for the sophisticated repressive and lethal tools (tested on the Palestinian population), which are sold to Western powers.

In this system of international domination, Israel has a place of choice, which explains the exceptional tolerance it enjoys while it has been multiplying its international law violations throughout occupied Palestine.

On the other hand, the proximity of the presidential campaign in France explains the timing of this decision. Most potential candidates have reaffirmed their unwavering support for the Zionist project, with the notable exception of candidates considered to be part of the ‘radical left’.

One right-wing candidate, Valérie Precress, even chose an outspoken Zionist as her advisor on international issues.

Winning overt or implicit support from the Israel lobbies is becoming an important element in France’s election campaign, all against a backdrop of the rising Islamophobia.

Israel is particularly worried about the discredit at an international level. In this context, Tel Aviv knows that any show of complicity with the apartheid regime imposed in Palestine is supposed to produce gains.

Reaction of the Solidarity Movement in France

The Association France-Palestine Solidarity, the main association of solidarity with Palestine, reacted with a first unambiguous statement, recalling that “solidarity is not a crime, it is a duty” and quite rightly that “support for the legitimate claims of the Palestinian people is in no way comparable to any call for hatred towards Israel or the Israelis, it is a call for justice and the application of international law”.

In addition to the two associations concerned by the decision, the Collectif Palestine Vaincra and the Comité d’Action Palestine, others such as the Union Juive Française pour la Paix and Europalestine have reacted quickly. A petition is online to show their refusal of the government’s liberticidal decisions.

It would be important for other organizations, focused on the defense of individual and collective rights, to come forward to protest against these iniquitous decisions. Indeed, any breach of solidarity will be a loophole that can be exploited by the supporters of apartheid in Palestine to impose further bans and dissolutions.