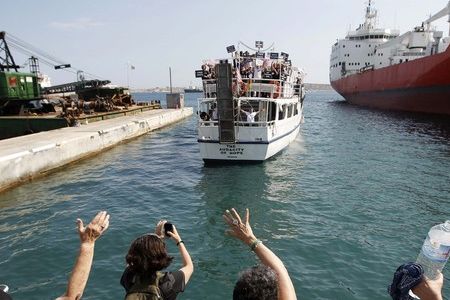 People wave as the US boat sails in the Perama port in southeastern Greece on July 1, 2011.Activists sailing with a

Gaza Strip-bound aid vessel are to continue with their trip to the Israeli-blockaded sliver despite facing obstruction in their Greek stopover.The United States-flagged ship The Audacity of Hope along with all other vessels which share its cause, have been banned from leaving Greece’s coast. Greek authorities have also arrested the US ship’s captain John Klusmire on the charge of attempting to violate the prohibition, ordering the 60-year-old to attend a Tuesday trial. “We were thinking that we were going to have full cooperation from the authorities here in Greece,” activist Richard Lopez, who is accompanying the US group, said on Sunday as the vessel is docked at the port of Keratsini in southeastern Greece , the Associated Press reported. He, however, said, “We still intend on going to Gaza, that’s why we came here.” The ship has been scheduled to join a number of other vessels in its mission to take humanitarian supplies to Gaza. The siege on the enclave has been depriving the 1.5-million Palestinians there of food, fuel and other necessities since its imposition by Tel Aviv in June 2007. The entire fleet is called Freedom Flotilla II, named after the first such convoy, which lost nine of its Turkish activists in a violent Israeli attack on May 31, 2010. Israel has, meanwhile, clearly asserted that it would stop the boats from reaching the impoverished coastal strip. The flotilla already has an Irish boat and one jointly sailed by Greek, Swedish and Norwegian activists sabotaged. The Irish campaigners have called Tel Aviv the main suspect behind the damage to their vessel.