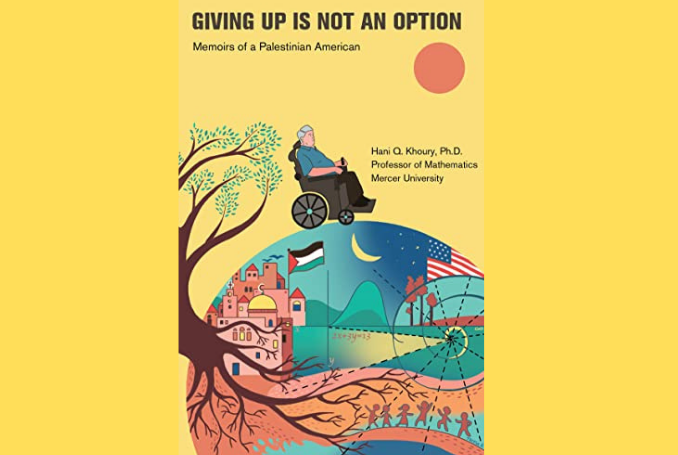 In an interesting short work, Giving up is not an option – Memoirs of a Palestinian American, Hani Khoury outlines the thread of his life from growing up in Palestine followed by his move to the U.S. for educational purposes.

Along the way, he hits upon several themes – one of the main ones being his path through life with a disability that kept him confined to a wheelchair for most of his life. Two other themes intermix with this: first are comments on Palestine and Israel; and another large theme is education, in particular the study of mathematics.

Khoury was born in Nablus with spinal muscular atrophy, a disability in Palestine severely limiting accessibility to already limited activities. Education became his focus and at the age of eighteen, he moved to the U.S. to continue his studies, a journey that occupied thirty years of his life as a student and educator.

A very human context is given, a personal perception of historical events while in school, an examination of the moral aspects of occupation, and comments on the dehumanizing actions by occupiers in everyday life. It was his “Misfortune to live and grow up under one of the most brutal military occupations in the world.”

Having experienced and looked at the different religions of his native land, Khoury says his beliefs are of a secular humanist, based partly on “the fruits of science” and “education as a philosophy of liberation, for it can and should provide all of us with hope for a better future.”

Relating to his specialty in the field of mathematics, he tends to indicate that math, with its required thinking skills, is a major component of critical thought leading to democracy. Again speaking of education and democracy he says, “ Informed engagement in civic and political life are essential prerequisites for democracy….including mathematics education.” While I believe he gives too much emphasis to math’s influence on critical thinking skills and democracy, it is readily understood from his personal life story and success as a math teacher.

A Return to Palestine

After many years of teaching, Khoury returns to his hometown, Nablus. He provides a precis of the historical changes that have occurred between his departure and return. He notes the failure of the Oslo Accords, the security cooperation between Israel and the Palestinian Authority [PA], and the common strategic interests Israel has with the U.S.: oil, geopolitics, and military superiority.

In his summary, he says the PA “has failed the aspirations of the Palestinian people.” On the settlements, he indicates their “massive spread” is “impossible to reverse,” leading to the current apartheid system and the future need for a democratic unitary state.

He concludes with notes on international law, but more personally on education, risk-taking, courage and honesty, and, as per the title, not giving up.

‘Giving up is not an option – Memoirs of a Palestinian American’ is a short readily accessible read and provides a unique Palestinian view of a life directed towards education and critical reasoning as a necessary part of life and democracy.