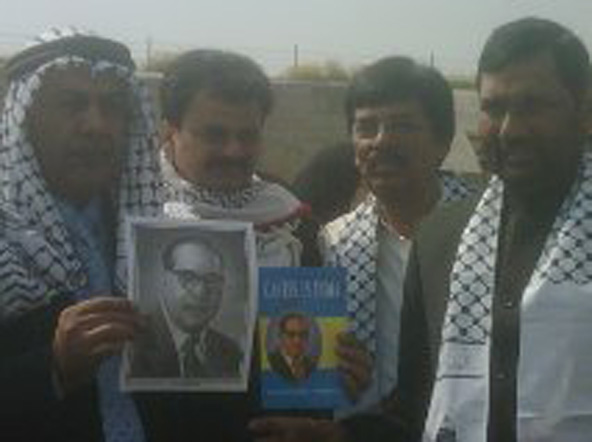 The Indian convoy has finally set off towards Jerusalem!! In a farewell ceremony that was held at the Rajghat,

which is the final resting place of Mahatma Gandhi. The 54 member Indian delegation was felicitated by Shri Ram Vilas Paswan (Member of Parliament & President Lok Janshakti Party). The delegates were also welcomed by Mr. Zuhair Hamdallah (2nd Consul, Palestine Embassy) & Shri Mani Shanker Aiyar (Member of Parliament).
Shri Ram Vilas Paswan congratulated the delegates for their commitment for the cause of Palestine, as it embodied the teachings of Mahatma Gandhi, Ram Manohar Lohia & Dr. Baba Saheb Ambedkar. He stated that this movement would serve to create awareness about the cause of Palestine in India & across the world. The freedom of struggle of Palestine he said was interwoven into our very freedom struggle. Shri Paswan finally said that his party would now lead a convoy of Indians to Jerusalem. He also promised to raise the issue in parliament & take up the matter with the government of India.
The delegates were also felicitated by Shri Mani Shanker Aiyar, who is known for his commitment to the cause of Palestine. He harked back to the days when India took a principled position & was steadfast in our opposition to the colonial occupation by Israel.
Mr Zuhair Hamdallah, a veteran of the Palestinian freedom struggle, with tears in his eyes extended his heart support to the Indian effort. He called for a greater role for the Indian people & government in their traditional & historical support for Palestine. He stated that all the Palestinian & Arab people respect Mahatma Gandhi & his unique contribution of civil-disobedience & non-violent resistance to the world.
The delegates come from all the four corners of India & represent the diverse, plural & secular ethos of India. Each of the delegates explained the reasons for their participation in the convoy. The meeting commenced with an all-religious prayer & then we paid our homage at the shrine of Mahatma Gandhi.
The Indian convoy will cross over to Pakistan across the Wagah border on the 10th of March. Prior to that they will be felicitated in Amritsar with programmes held at the Golden Temple & the Jalianwala Baug, where we will pay our respects to the Sikh Gurus’s & pay our homage to the martyrs of the freedom struggle.
In Karachi, the Indian delegates will also be joined with delegates from Indonesia & Malaysia. The convoy, which has been organized by the Asian Peoples’ Solidarity for Palestine (APSP), will then travel to Iran, Turkey & then by ship, to Beirut.

Finally on the 30th of March, with hundreds of thousands of people & delegations from the majority of the nations of the world, they will march to the borders of Palestine, demanding an end to the Judaisation of Jerusalem & Freedom for Palestine.
We march in the tradition of the Satyagrahis & with our commitment to non-violent mass action, in our struggle to liberate Palestine & to defend the sovereignty of our very own nation from Israeli & American hegemony. In that, the Palestinian issue, stands at the very centre of the geo-political crisis of our times & Jerusalem lies at the very heart & soul of the crisis. We are committed to a just solution, which are enshrined in various international law & UN resolutions.