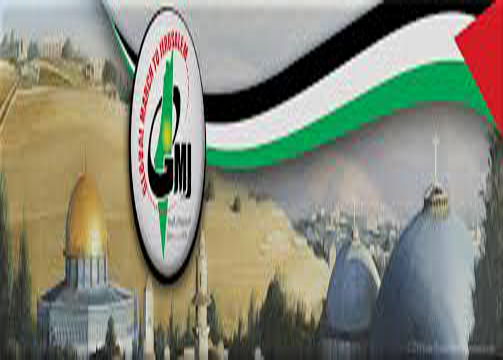 The Global March to Jerusalem (GMJ) strongly condemns the escalating attacks against Palestinian Christians in Jerusalem in the lead up to the visit by Pope Francis on 25th May.

Jerusalem is the only city in the world where the Prophets of Judaism, Christianity and Islam all performed prayer and is considered a beacon of peace for all of humanity.

However, ever since the Zionist occupation first began ethnically cleansing the indigenous Palestinian population of Jerusalem, it has been waging a racist campaign to erase the Muslim and Christian identity of the Holy City.

In recent weeks, this racist campaign has intensified.

On 5th May, Jewish extremists spray-painted “Death to Arabs and Christians and all those who hate Israel” in Hebrew on the outer column of the Office of the Assembly of Bishops at the Notre Dame Centre in the eastern part of Jerusalem.

And on 9th May, Jewish extremists once again spray-painted anti-Christian graffiti on a wall adjacent to a Roman church on Hahoma Hashlishit Street in Jerusalem. The graffiti read: “Price tag, King David is for the Jews, Jesus is garbage.”

In addition, “Death to Arabs” graffiti was spray-painted on the door of a home and on an electrical box in the Old City of Jerusalem.

Meanwhile, Jewish extremists have been holding a series of protests against the Pope’s visit, issuing provocative statements that question Christianity’s claim to the Holy Land.

But while the GMJ calls for the international community to condemn these horrific hate crimes, the GMJ also wants to stress that they are not exceptional acts of terrorism; but instead, merely another extension of the Israeli occupation’s historical oppression against Jerusalem’s indigenous population of Palestinian Christians and Muslims.

Indeed, the Israeli occupation’s imposition of curfews upon the Christian quarters in Jerusalem during the Pope’s visit is a clear example of the on-going Zionist effort to Judaise the Holy City by attempting to erase its Christian and Muslim presence.

The GMJ stands in solidarity with our Palestinian Christian brothers and sisters in the Holy City and calls upon Pope Francis, along with people of conscience around the world, to act now to demand the liberation of Jerusalem and all of Palestine.