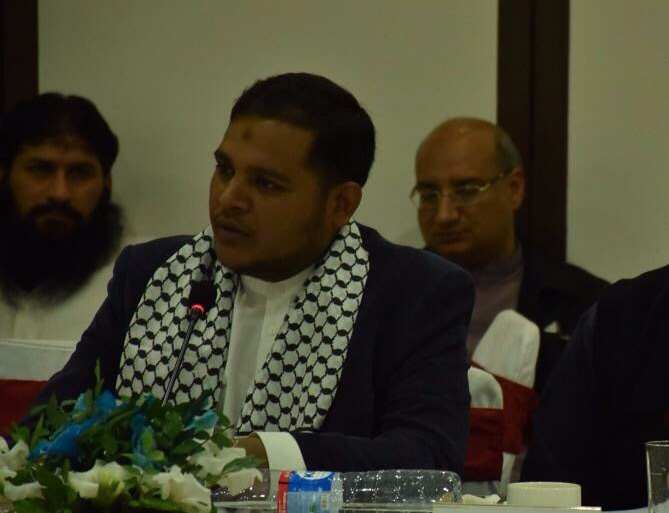 participated in the conference that was chaired by central President of Jamiat e Ulema e Pakistan Dr. Sahibzada Abul Khair Zubair. Ameer of Jamat e Islami Pakistan Senator Siraj ul Haq, Secretary General Liaqat Baloch, MWM Pakistan’s Deputy Secretary General Allama Ameen Shahidi, Ameer of Jamat ud Dawa’a Hafiz Muhammad Saeed, senior leader of Jamiat e Ulema e Islam (F) Haifz Amjad Khan, leader of Islami Tehreek Pakistan Allama Arif Wahidi, renowned Islamic scholar Allama Saqib Akbar, Professor Abdul Rahman Makki, Peer Mahfooz Mashhadi, Allama Muhammad Khan Laghari, Allama Abdul Ghaffar Rohri, Hafiz Akif Saeed, Peer Abdul Raheem, Dr. Muhammad Ameen, Qazi Zafar ul Haq, Abdul Rasheed Turabi, Professor Ibrahim, Nazeer Janjua, Abdullah Gul, Naeem Qureshi, Sabir Abu Maryam and others were also present during the meeting.
It should be clear that more than 150 Ulema and religious scholars of Pakistan’s 28 religious organizations were present there.
Central Secretary General of Palestine Foundation Pakistan said “Secular conduct of rulers of Pakistan shows that senior religious leadership of the country did not perform its responsibilities well due to which the whole country has been facing the consequences today”. While talking about the topic he said “the US and Israel are the sole reason for all problems of Muslims and Muslim countries all over the world, including Pakistan. Prime Minister of an Islamic state like Pakistan is now talking about making the country a secular state”. He further said that no one should be doubted about the involvement of US and Zionist forces in such planning and statements.
While talking about the current situation of occupied Palestine central leader of Palestine Foundation Pakistan said “although indifference of international community is really sad but even Muslim Ummah did not play the role it should have played for the defense of first Qibla, with Palestinians. He questioned senior religious leadership of Pakistan that did oppressed people of Palestine and Kashmir ever asked them for financial aid? Or ever asked for arms? They never asked for any such support then why have we left all our responsibilities and not give importance to Palestine issue? He further said “US and Zionist forces are involved in all conspiracies from Palestine to Pakistan and has not only effected Palestine but also Syria, Lebanon, Iraq, Afghanistan, Libya, Tunis, Egypt, Jordan, Nigeria, Sudan, Middle Eastern states, Pakistan and occupied Kashmir”.
He also stated that Zionist forces have nourished the formula of dividing the nation in Pakistan. Many anti-Pakistan and anti-Islam schemes had been planned in US Consulates in Pakistan and they were also linked to Israel.
Sabir Abu Maryam said “Palestine is the country of Palestinians and Islamic leadership of the whole world, including that of Pakistan, should support Palestinians. Although people of Palestine do not demand us to support them but being a Muslim it is our religious and moral responsibility to continue supporting oppressed Palestinians both politically and morally. According to the saying of Last Prophet (PBUH), Muslims are like a human body and if a part of the body gets hurt the whole body feels the pain but sadly, we have been so involved in our internal issues that we do not have time to consider the issues of Ummah. For this very purpose, Zionist forces created problems in our countries so that we would not be able to struggle for the independence of Bait ul Muqaddas. It was for securing Israel’s interests that Daesh and other such groups were established in the Muslim world. The most shameful is the fact that Arab and gulf countries of west Asia have been equally participating in such crimes”.
In the end, Sabir Abu Maryam demanded the religious leadership of Pakistan to declare support for Intifada and demand the government of Pakistan to raise this issue on international level. Al leaders of religious parties present in the meeting agreed to Sabir Abu Maryam’s resolution, condemned Israeli oppression and announced support for Intifada and demanded the government of Pakistan to do the same.