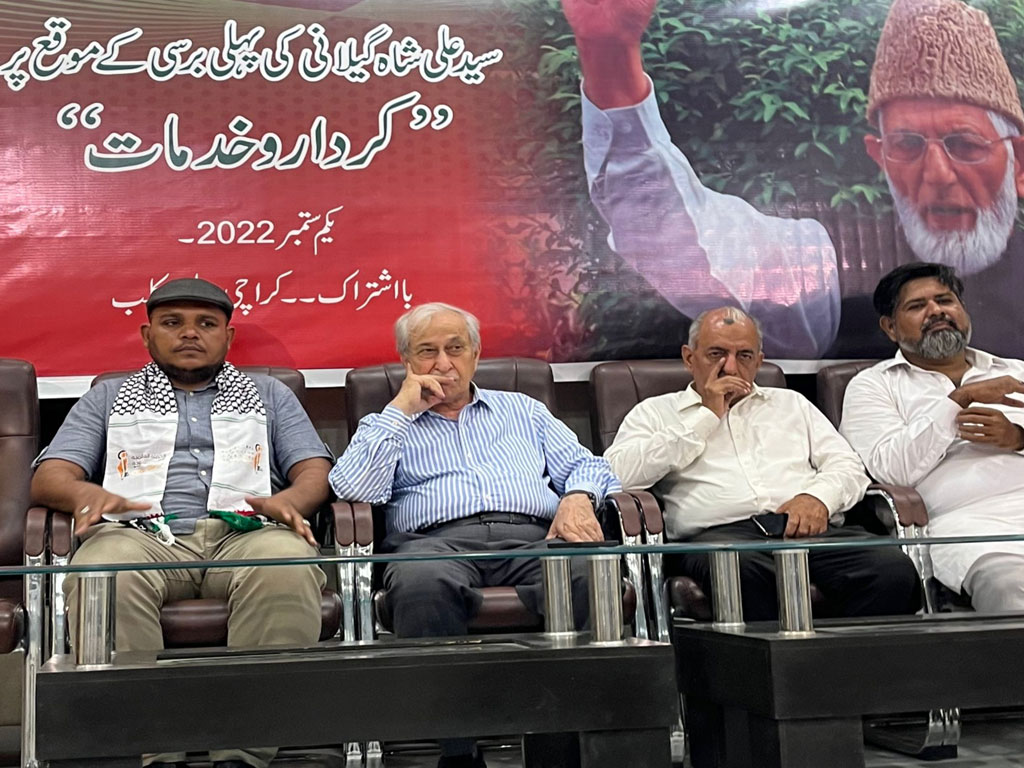 KARACHI – Central Secretary General of Palestine Foundation Pakistan (PLF) Dr. Sabir Abu Maryam has said that the sacrifices of Kashmiri freedom fighter leader Syed Ali Shah Geelani will not go in vain.He expressed these views while addressing a seminar held at the Karachi Press Club on the occasion of the first anniversary of Syed Ali Geelani in collaboration with Karachi Press Club and Human Rights Council.

While addressing the seminar paying homage on the first anniversary of Syed Ali Geelani, Dr. Sabir Abu Maryam said that under a systematic conspiracy, efforts are being made to forget the Kashmir issue and the Kashmiri people are being made to live in Occupied Kashmir and Azad Kashmir.

He said that Syed Ali Shah Geelani has made immense sacrifices for the freedom of Kashmir and endured the hardships of imprisonment for the sake of the Kashmiri people but never surrendered to the cruel and oppressive Indian forces.

The Secretary General of Palestine Foundation Pakistan said that the global colonialist America made a heinous conspiracy to forget the Palestine issue and to eliminate the importance of this issue among the Muslim Ummah under the plan called Deal of the Century. Support of the Muslim nations towards Palestine cause, the United States faced defeat and today Israel is forced to kneel before the Palestinians.

He said that if anyone in the world, including the government of Pakistan, thinks that the solution of the Kashmir issue is possible through American mediation, it will be the biggest deception in history. America is not the solution to the problems, but the root of the problems.

Dr. Sabir Abu Maryam said that Syed Ali Geelani and his other colleagues did not make sacrifices for the other governments of the world that they would negotiate on Kashmir. He further said that the mission of Syed Ali Shah Geelani will continue.

Secretary General of Palestine Foundation Pakistan said that Syed Ali Geelani has been given the title of Father of Hurriyat (Freedom Fighter) in honor of his tireless struggle and fighting against India’s aggression and state terrorism.

He said that Syed Ali Geelani expressed his great love, devotion, passion and love for Pakistan by chanting “We are Pakistanis, Pakistan belongs to us”. This slogan of his is a torch for future generations.

He said that the issue of Kashmir should be resolved according to the aspirations of the Kashmiri people and no one has the right to decide the fate and future of Kashmir.

On this occasion, he strongly condemned the continuous Indian atrocities and state terrorism in Kashmir and said that the usurping and aggressive forces of India can only be explained by the language of resistance. On this occasion, Ali Raza, Qasim Khan, Muhammad Haider and others were present.