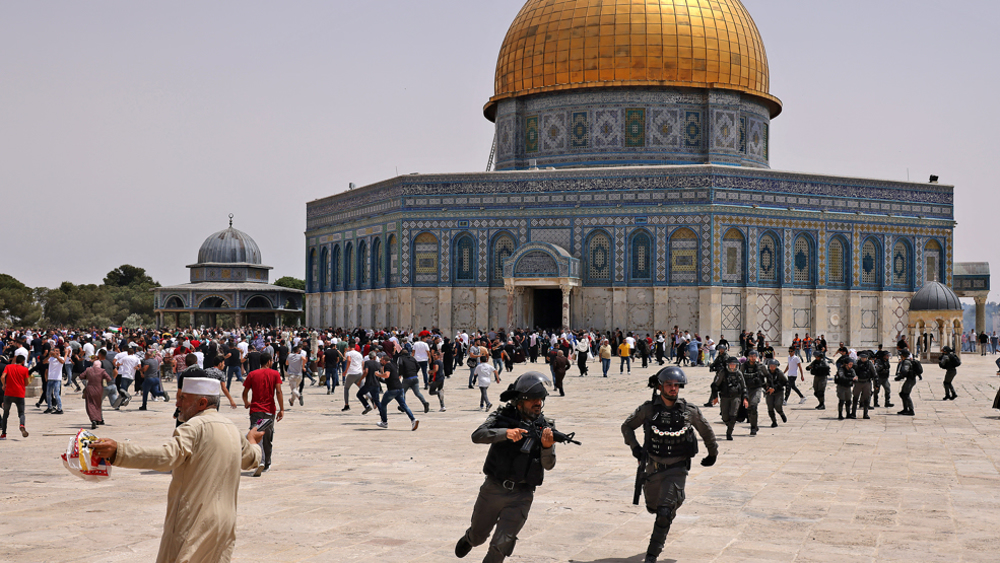 The Palestinian Hamas resistance movement has called on all Palestinians to stage a massive rally at the al-Aqsa Mosque compound on Tuesday in an attempt to prevent an upcoming provocative parade by far-right Israeli settlers in Jerusalem al-Quds.

Hamas spokesman Mohamed Hamada said on Sunday, “Let’s make next Tuesday a day of rallying and marching towards the al-Aqsa Mosque and a day of anger and defiance against the Israeli occupation.”

The so-called March of the Flags was originally planned to be held on May 10, but Israeli right-wing groups scrapped the controversial parade after police refused to authorize it, and Hamas warned of the consequences.

The organizers of the march say they reached an agreement with Israeli police on Friday to let the show roll on Tuesday. According to their statement, the march would begin at HaNevi’im St. and head toward Damascus Gate, where settlers would hold a flag-waving procession.

On June 5, Khalil Hayya, a senior Hamas figure, warned of “another round of confrontation” if Israel did not cut the trend of violations.

“We clearly say to the mediators and the international community that the time has come to restrain the occupying regime, otherwise the thunderbolts and the responses of the resistance will remain strong. We are not interested in war, but we want freedom, independence, and stability in our land,” the Hamas official warned.

In May, hundreds of Palestinians, including women and children, were killed in the Israeli bombardment of the blockaded Gaza Strip. A ceasefire came against the backdrop of a campaign by the Gaza-based resistance movements of firing over 4,000 rockets into the occupied territories, some reaching as far as Tel Aviv and even Haifa and Nazareth to the north, in the face of the Israeli war.
Related Topics:al-Aqsa Mosque compoundal-qudsEast Jerusalem al-QudsIsraeli aggressionPalestine