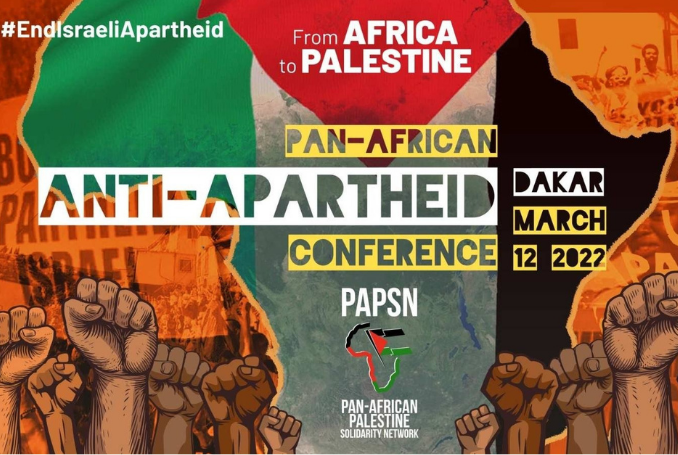 Activists from across Africa are gathering in the Senegalese capital, Dakar, from March 10 to 12, to mobilize support for Palestine, the Pan-African Palestine Solidarity (PAPSN) Network said in a press release, a copy of which was sent to The Palestine Chronicle.

The event, hosted by the Senegal Palestine Solidarity Platform, has been organized by PAPSN, a growing network of Palestine solidarity groups, civil society organizations and activists from more than 20 countries on the continent.

The event is intended to mobilize support for the Palestinian liberation struggle and strategize against Israeli apartheid under the theme “From Africa to Palestine, United Against Apartheid.”

“This will be the first time that Palestine solidarity activists will hold a gathering of this nature in Africa,” the statement read, adding that “it comes just a month after Amnesty International joined Palestinians and many other human rights organizations in recognizing that Israel was practicing a cruel system of domination and the crime against humanity of apartheid against the Palestinian people”.

Emma Nyerere from the Pan-African Women’s Organization, and Mandla Mandela, grandson of South African liberation icon, Nelson Mandela, are among the participants.

According to the statement, they will be joined by Palestinian activist Jamal Juma, from the Palestinian Boycott, Divestment and Sanctions (BDS) National Committee and Shaden Quos, a young activist from the Afro-Palestinian community.

“The solid support that Palestine enjoys among an influential bloc at the African Union, in addition to the popular support the Palestinian cause continues to receive throughout Africa, indicates that, despite the mistakes of the past, Palestine remains a central issue on the continent,” Palestinian journalist and editor of The Palestine Chronicle Ramzy Baroud wrote in a recent article.

Palestinians “ought to mobilize the numerous civil society organizations throughout the continent in order to send a strong, collective message to Israel that it is not welcome in Africa,” Baroud added.