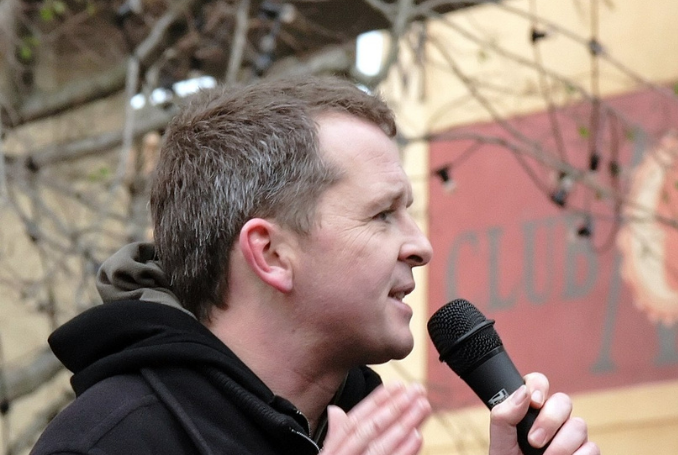 Irish MP Richard Boyd Barrett recently gave it to the Irish Parliament. There’s really no other way of putting it and it was beautiful.

He schooled his colleagues on their hypocrisy. He told them what needs to be said by all leaders of the world, to those who pretend that Israel is a democracy while sanctioning other bad actors:

“All of us have rightly condemned the crimes against humanity that are being committed by Vladimir Putin in Ukraine. And the government has moved instantly within five days to sanction Putin’s regime and take urgent action. And the strength of language that was used rightly against Putin as a barbarian, as a thug, as a murderer, as a warmonger, all of which are true. All of those things, all of those things apply to the state of Israel in its treatment of the Palestinians…. But you will not use the same strength of language when it comes to describing Israel’s treatment of the Palestinians.”

Why Barrett’s condemnation is also so refreshing is that relatively few leaders of the so-called “free world” (the West) are doing it. They are simply going along with the false narrative that Israel is a perpetual victim of Palestinian terrorism. This reinforces the myth, identified by Edward Said in his seminal book The Question of Palestine, that Palestinians are generally criminals. Said speaks to how this both marginalizes both their voices and truthful accounts of reality, experienced by Said himself:

“My hope is to have made clear [in the book] the Palestinian interpretation of Palestinian experience and to have shown the relevance of both to the contemporary political scene. To explain one’s sense of oneself as a Palestinian in this way is to feel embattled. To the West, which is where I live, to be a Palestinian is in political terms to be an outlaw of sorts, or at any rate very much an outsider. But that is a reality, and I mention it only as a way of indicating the peculiar loneliness of my undertaking in this book.”

Politicians need to wake up. It’s not Palestine but the Israeli state that is the terrorist. They may not appear that way at all to their allies. But that’s beside the point and admittedly obvious. For the most part, Israel has and continues to craft a wonderful public image of itself, often through glossy public relations and corporate lobbying. It fails to ever acknowledge and overshadows how it has criminally devastated Palestine.

Barrett on the other hand was courageously challenging that. It certainly didn’t earn him points among those who benefit from doing business with Israel and don’t want to be seen as wrong for benefiting in that process. After all Israel has built itself on the decades-long ethnic cleansing of Palestine. If you in turn act in such a way to gain from that, it is rather shameful. It may even seem easy when the “rewards” are tempting like money and political power.

You don’t simply do what’s right when it’s easy. In fact, one ought to be suspicious of those who do. It may be that they don’t believe in or genuinely endorse what they’re actually doing at all but are acting such to selfishly get ahead, paralleling Barrett’s observation that “if you’re going to have moral standards, those standards have to be consistent. Otherwise, they are not standards at all. They are just cynicism.”

Similarly, when “morality” is reduced to an egotistical calculation, namely doing “good” only when it brings about value for the person acting and regardless of the negative consequences it has for others, it becomes a crude means to an end. This is the domain of the Wall Street psychopath who—with any pang of conscience—can orchestrate a major economic recession, profiting immensely for themselves to the detriment of countless others. It is a domain, to be sure, wholly bereft of righteousness.

So long as Israel chooses to be evil we, following Barrett’s example, must castigate those who both support it and prefer we remain silent. Such silence, though it may appear to some as “well-mannered”, is by no means benign.

It amounts to something horrific: the bloody erasure of Palestine. If Israel wants people to stop criticizing it so harshly, it needs to dramatically change. The Palestinian struggle for justice has been pressuring them to do that far too long. And we’ve nothing to apologize for.

The oppressor, not freedom for Palestine, has always been the problem.