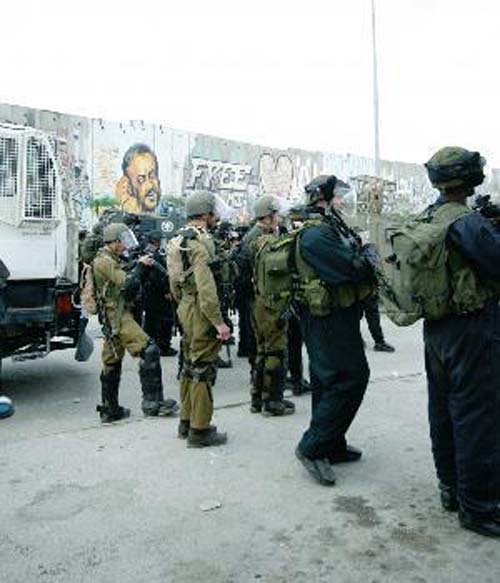 On March 30, 2012, the Israeli Occupation Forces (IOF) opened fire on marchers as they headed towards Jerusalem marking Palestinian Land Day. The Global March to Jerusalem is an initiative taking place across the world, with hundreds of thousands of people involved. Marches were organized within Palestine, 1948 territories and Gaza, as well as all surrounding countries and parts of Asia, North America, and Europe. Among other things, the march was calling for an end to the ethnic cleansing of Jerusalem and Palestine at large, the right of return for all refugees, and the protection of Jerusalem’s non-Jewish holy sites, which are currently at risk. At least 200 people were injured by the IOF in protests across Palestine, and one young man was killed in Gaza.

The Israeli military employed a series of weapons on the unarmed protesters, including the ‘siren’, which emits a deafening ringing; the ‘skunk truck’ which propels torrents of a sewage-like liquid; rubber-coated steel bullets; sound bombs; high-velocity tear gas; and live ammunition.
When I arrived at the protest area, people were running away as tear gas was fired. I ran towards the soldiers, trying to get to the area behind them where journalists were set up. The ‘siren’ was already put in use, getting unbearably louder as I approached, and the street already had a grim look only minutes into the march. People hid behind cement blocks and smoke filled the air. As soon as I reached the soldiers, the ‘siren’ became a quiet ringing. The technology used allows the IOF to propel the sound in a specific direction.

As I snapped photographs of the abundant Israeli soldiers in the area, and the murals covering the apartheid wall behind them, the ‘skunk truck’ moved forward and arbitrarily fired sewage water at the people, houses and shops in its reach. Journalists ran for cover to save their cameras from damage. Others ran to save themselves from being marked with the foul smell for days to come. A mist carried back to where I stood and I almost choked. The scent is stronger and lingers longer than would even real sewage. One young woman marched up to the truck, and was drenched, but managed to place a Palestinian flag on it.When they finished with the ‘skunk’, the soldiers got into jeeps and moved forward, firing tear gas at the same time. The protesters ran in a frenzy to find clear air and avoid arrest by the approaching army.

I ran for cover behind a building from the onslaught of tear gas grenades. A handful of others joined me and we thought we had reached safety when the smell of tear gas overcame us. We ran deeper behind the building, stepping through piles of garbage and trying to find relief from the gas filling our eyes and lungs. To both directions was gas. There were no options. Most of us fell to the ground choking and trying to stay conscious. Someone was desperately shouting the name of a blind girl who they had lost track of in the chaos. When I was able to open my eyes a slit, I saw that the soldiers had come to our hideout and were beckoning everyone out. In the chaos of the moment we didn’t think about disobeying. As soon as we were out, a commander targeted one of the boys among us. It was an arbitrary choice. Another woman and I stood in between the soldiers and the young man, pointing out their discrimination in that whatever he had done, we had also done. We attempted to de-arrest but soldiers surrounded us and aggressively took the young man away, still choking on tear gas.

Across the street I found a group of soldiers banging on the door of an apartment building, trying to break it open. Faces of women and children looked down at them from the windows above. They broke the door’s window and continued to hammer the door until it was bent out of shape and able to be opened.

An Israeli soldier stands with his hands on his gun as others behind him break down the door to a Palestinian apartment building.

When they finally got the door open, a group of soldiers stamped into the building and up the stairs. The last few walked backwards, with their guns pointed at us, comically as if myself and a few other journalists would attack. Other soldiers stayed at the door, guarding it. The group of soldiers made their way through the building then emerged on the roof from where they would shoot rubber-coated steel bullets at a wider range of people.

Israeli soldiers break the door to a Palestinian apartment building. QalandiaI grew frustrated of standing among the soldiers with the other journalists so amidst gunfire I ran back towards the protesters. The scene was much grimmer from this perspective. Every few minutes people would shout for an ambulance and the wounded would be carried away.

A young man is carried to an ambulance after being injured by a rubber-coated steel bullet.
As time passed, the shooting of rubber-coated bullets seemed to escalate and people were no longer seen in the centre of the street, but rather pressed against buildings and behind walls.

An injured man’s feet are visible as medic volunteers attend to him. It was draining to continue to duck at the sound of gunfire and watch as the ambulance workers crowded around a person, so eventually I asked a dozen people to come walk up to the soldiers with me. Many agreed so we stepped out into the street, arms and flags in the air and began to walk. The army continued to fire. I looked behind me and only one person was left walking with me. “Don’t worry about it, Rana,” he reassured me, “keep going.”

An injured medic volunteer is carried into an ambulance.
We stayed motivated and it was liberating to walk unabashedly towards the Israeli soldiers, dressed in military armour and carrying their range of weapons. At the sound of gunfire, we turned our heads away so that at least if injured, our eyes would be protected. We didn’t flinch as soldiers fired tear gas over our heads.
A handful of others caught up as we approached the soldiers. The idea was to stand in front of them and prevent them from firing at the protesters behind us. We were chanting slogans like, “no justice, no peace,” and “we are peaceful, what are you?” At first I didn’t see many journalists and the soldiers got aggressive quickly. An Israeli soldier grabbed the Palestinian flag from my hands and threw it on the ground. Me and another girl tried desperately to reach it but we were hit and shoved away.
We linked arms and formed a chain. When the Israeli military tried to move to the side, we moved with them. They attacked the group, clearly trying to break us up and make arrests. Soldiers kicked and beat the group. When one young woman put her arms in the air and shouted that she was unarmed, a soldier picked up a rock and smashed her hand with it. The young man to my left was dragged away and I felt myself taken in a headlock and pushed to the ground. Bodies and feet pressed on me and I focused only on keeping my head from hitting the pavement as chaos ensued around me. I felt people pulling, pushing, and hitting me. When I could lift my head to see, the same friend who had initially marched with me was holding on to me, and I am certain saved me from arrest.
I learned later that the other activists had been similarly attacked, but had managed to prevent any other arrests. We stood there stunned, injured, and exhausted.
We continued to chant as we backed away and returned to the rest of the protesters. Only a few meters away they began to shoot again and we saw more injuries carried into ambulances. Throughout the day I witnessed several people bleeding from injuries by rubber-coated bullets, but refusing to take up space in the ambulances.
Later, after many had left and the protesters were few, we were standing against a wall and turning our heads at the sound of gunfire. Suddenly, a rubber-coated bullet hit a young man standing beside us in the face. His expression was frozen as if he had lost consciousness with his eyes still open. We shouted for an ambulance and he was carried away.

A young man hit just under the eye by a rubber-coated steel bullet.

That was our final straw and we decided to head home, having been at the protest for about six hours. Clashes continued until at least 10 p.m. when my friend called me to say he was finally leaving, and completely drenched in ‘skunk water’.
These experiences are so common in the Palestinian struggle that one easily becomes normalized in order to cope. As activists, this is something we are fighting, and nonetheless we are all deeply affected by these experiences whether we can still find the passion to express it or not. Understand only that this was not a unique day. This is a regular response to the peaceful protesting, which occurs at least weekly across Palestine. A young man being arbitrarily chosen for arrest is something every family has experienced. The IOF breaking down a door in order to use the roof as a military base is a common practice. Breaking the windows of an ambulance with gunfire, targeting journalists, firing at homes and shops, can all be witnessed in a trip to Palestine.