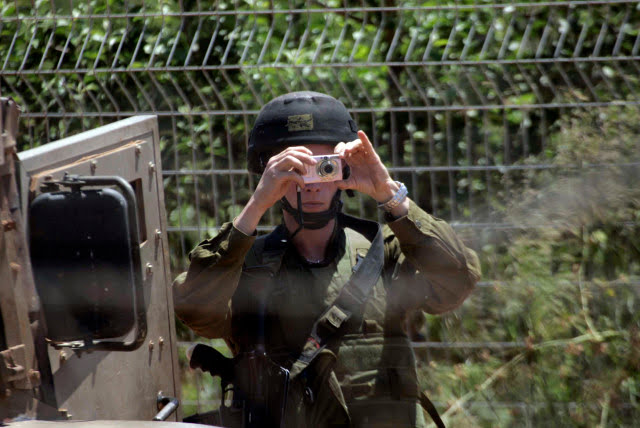 According to footage obtained by anti-occupation group Breaking the Silence, Haaretz reported that the videos depict soldiers discussing the Blue Wolf system with reference to foreign activists.

The Blue Wolf system, which the occupation forces have been using for the past two and a half years, is a database into which the details and photos of Palestinians are uploaded, enabling their tracking and monitoring.

The security coordinator of a local settlement built on Palestinian lands can be heard telling the soldiers:

“The brigade commander told me it’s very important to get pictures of their faces,” referring to the faces of left-wing and foreign human rights activists.

He added, “So they don’t let them into the airport the next time.”

About two weeks ago, soldiers were carrying out operations near Susya in the South Hebron Hills.

Foreign human rights activists were at the site – mainly Europeans – showing support for the Palestinian farmers working there.

In the video, a soldier can be heard asking his commander about one of the foreign activists: “Is she in the database?”

One of the commanders ordered a soldier carrying a digital camera to photograph the women.

“Where is the Blue Wolf?” one of the soldiers asked another.

And the other soldier answered: “They’re not willing to be photographed, they’re afraid of the cameras.”

Among the activists were Hebrew speakers who understood the conversation among the soldiers.

They were concerned they would be photographed.

“They’re getting away from us,” one soldier is heard saying to another when he noticed that some of the activists were withdrawing to avoid the soldiers’ cameras.

“It’s mainly the European,” said another soldier, who then tried to approach the activists more calmly and asked one of them: “Can we take your picture? Maybe a selfie together?”

The security coordinator of one of the nearby settlements was on the scene, standing next to the soldiers, also photographing the activists.

The IOF said the security coordinator was indeed known to the senior officers of the Central Brigade and the Central Command.

However, he refused to reveal his identity or that of the settlement where he works.

After the soldiers photographed the activists, their commander was heard asking whether there were pictures of everyone, adding: “Especially that one,” referring to an American woman who had refused to have her picture taken for the Blue Wolf database.

“Anybody who took a picture, send it to me on WhatsApp,” the commander ordered. “The photos have to be downloaded.”

In a separate incident two days later, Maya Bickel, 23, an activist with the Center for Jewish Nonviolence, can be heard in a video saying,

“We arrived at the site after a Palestinian shepherd said soldiers were removing him and had assaulted his wife. When we got there the soldiers spoke to us with contempt.”

“This time it was very different because usually the soldiers take pictures at all the incidents but this time they insisted on photographing the faces. They tried by force to get close to our faces with the camera.”

“The police arrived, we’d called them and we told them they were trying to remove us without an order and that the shepherd had been assaulted.”

“The commander of the Hebron Brigade had asked to take pictures of faces, so they wouldn’t be able to get into Israel the next time.”

“That was a very different incident in terms of the soldiers’ behavior toward us,” Bickel explained.

“It felt like they had come to look for us personally and not to take action to bring order … I still don’t know if I’m in the intelligence database or what this means.”

Dubbed a “Facebook for Palestinians,” the execution of this program sounds as if it were taken from a dystopian sci-fi novel.

Israeli soldiers photograph random Palestinian passers-by on the streets of West Bank villages and cities, regardless of whether they are suspected of anything, and enter their details into a database that combines facial recognition with their personal records.

In November, the Washington Post published a comprehensive report revealing extensive use by the IOF of a database documenting Palestinians in the West Bank, but made no mention of documentation of human rights activists or foreign citizens.

On Wednesday morning, Haaretz reported that the occupation soldiers stationed in the West Bank at checkpoints and guard stations have recently been instructed by their commanders to feed the details and photos of at least 50 Palestinians per shift into the Blue Wolf database.