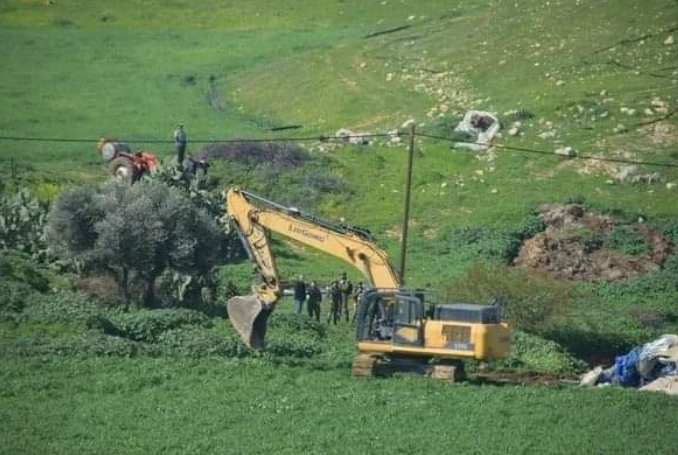 Suleiman Dawabsheh, the head of the Duma village council, said that Israeli forces escorted a bulldozer to the spring, south of the village, where the heavy machinery tore down the water pipelines the village council has set up at the spring in addition to a fence built around it.

Dawabsheh added that the spring is the main source of water herders use for their cattle in the village, which has been suffering from serious water shortages in light of Israeli control over all water resources in the occupied territories.

He pointed out that the Israeli army had notified the village council of its intention to stop restoration works at the site, prompting it to raise the issue at Israeli courts, but to no avail.

Rights groups have long reported that Israel’s control of water resources in the occupied West Bank has led to routine water shortages in Palestinian communities.

It has often been pointed out that Israel’s restrictions in the Palestinian territory force Palestinians to buy water directly from Israel while preventing Palestinians from constructing their own wells or other projects to enhance water access.

Most of the Palestinian territory’s land reserves are located in Area C – the more than 60 percent of the West Bank under full Israeli military control – where any Palestinian development is mostly prohibited by Israel. In addition, other restrictions, such as barring Palestinians from drilling wells deeper than 140 meters, prevents Palestinians from adequately accessing natural water sources.

As a result of these restrictions, many Palestinian villages in Area C and B – where Israel retains control over security matters – are forced to buy water from Israel’s national Mekorot water company.