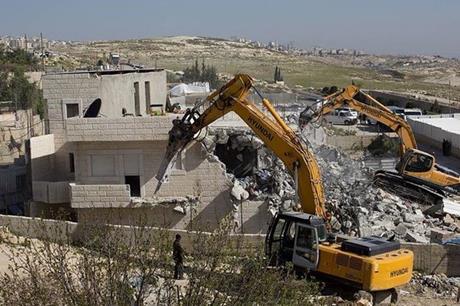 Occupied Palestine (QNN) – The Israeli occupation authorities demolished or seized 21 Palestinian structures in the occupied West Bank and Jerusalem over the past two weeks, The UN Office for the Coordination of Humanitarian Affairs (OCHA) has said.

In its report covering the Israeli violations during the period 22 March – 4 April, the OCHA pointed out that the livelihoods of about 115 people, including 44 children, were affected by those demolitions.

The OCHA indicated that those demolitions were carried out at the pretext of having no Israeli-issued building permits.

It explained that 13 of the structures are located in Talkarem, while two others in the herding community of Ras at-Tin in Ramallah which was declared by the Israeli occupation authorities a closed military zone.

The remaining six structures are located in Jerusalem, Jericho, Hebron and Bethlehem, the OCHA added.

The OCHA went on to say that 441 Palestinians, including 84 children were injured by the Israeli occupation forces across the occupied West Bank, which is more than twice as many as in the previous reporting period.

Since the beginning of Ramadan on April 2, the Israeli occupation forces have intensified their presence in and around the Old City of Jerusalem, including outside the Damascus Gate (Bab al-Amud), where Palestinians gather after breaking their dawn-to-dusk fast, the OCHA indicated.

Meanwhile, the OCHA added that Israeli settlers injured five Palestinians and damaged Palestinian-owned property in 35 incidents which is a 75 per cent increase in the settler attacks compared with the previous reporting period.

The report noted that there were 27 incidents during which the Israeli occupation forces opened fire off the coast of besieged Gaza or along its eastern fence to enforce access restrictions.