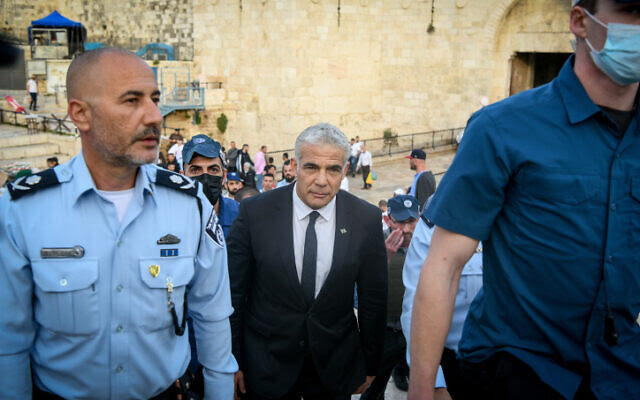 Lapid’s ‏incursion came despite concerns are running high, especially with the onset of Ramadan, as tensions could continue to escalate.

It was also the second night in a row in which Israeli occupation forces violently attacked and arrested Palestinian youths gathering in the area to mark the coming of Ramadan.

Bab al-Amud- or the Damascus Gate- is one of the main entrances to the Old City.

It is a popular spot where Palestinians gather and sing national songs as a form of civil protest.

They also gather to chat and even to drink coffee.

It has also been the site of more formal demonstrations by Palestinians and violent suppression by Israeli police.

Thus, the Bab al-Amud plaza has become the scene of a battle and tensions.

This included large numbers of Israeli police officers and forces, including mounted ones.

Moreover, they wield water cannons to disperse Palestinians gatherings at the site, attack and detain them.

Last May, violent attacks by Israeli police on Palestinian gatherings at the Bab al-Amud plaza provoked tensions across the holy city.

Also, a settler group worked to forcibly displaced Palestinians from their homes in the Sheikh Jarrah neighbourhood in Jerusalem.

Such tensions led to Israel’s May aggression on the Gaza Strip which killed at least 260 Palestinians, including 66 children.