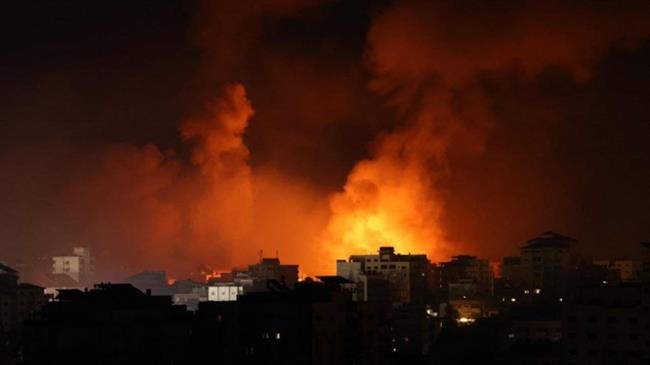 The Israeli regime attacks the Gaza Strip for a second time in as many days in outright violation of a fragile ceasefire that it had desperately demanded during its latest war on the Palestinian enclave.

On Thursday night, the regime’s warplanes hit at least five locations across the coastal territory, alleging them to be targets belonging to the Palestinian resistance movement of Hamas, Palestinian media outlets said.

The Israeli military, meanwhile, alleged, “The attack was carried out in response to the continued launching of incendiary balloons at” the occupied territories.

The regime regularly claims being targeted by balloons mounted with incendiary devices from the direction of Gaza. Its television channels also routinely broadcast footage of blazes billowing out across the occupied lands that border Gaza.

In an apparent bid at an uncalled-for hype, the military said rocket sirens had also been set off in the “Kfar Aza community” near Gaza’s border.

Israeli Ynet news site, however, acknowledged that there were no immediate reports of rockets or missiles landing near the community. It was possible the alarm had been triggered by machinegun fire from the strip aimed at Israeli aircraft, it added.

The military also said the regime’s chief of staff had “held a situational assessment in which he ordered a higher level of preparedness and for the IDF (the Israeli military) to make preparations for a variety of scenarios including a resumption of fighting.”

Israeli airstrikes had stricken alleged Hamas sites in two locations on Wednesday too.

Hamas, however, dismissed the fresh attacks as a means of the regime’s trying to cast attention away from its defeat during the war.

The war began last month and lasted for 12 days. Soon after its launch, Gaza’s resistance groups began firing more than 4,000 rockets towards the occupied territories.

The projectiles landed throughout the whole expanse of the territories, killing 11 Israelis and leaving millions of dollars in damage, prompting the regime to seek out a ceasefire.

“The occupation bombing of resistance sites is simply meant for show, said Hamas spokesperson Fawzi Barhoum, calling the strikes an attempt by the regime “to raise the morale of its soldiers and commanders after it collapsed” in the last confrontation.

He also warned of renewed fighting if Israel “continues to commit idiocies and target our people.”

Amid the warning, al-Aqsa TV, the official Hamas-run television channel, said the resistance had downed an Israeli drone west of the Gaza City shortly after the Israeli strikes.