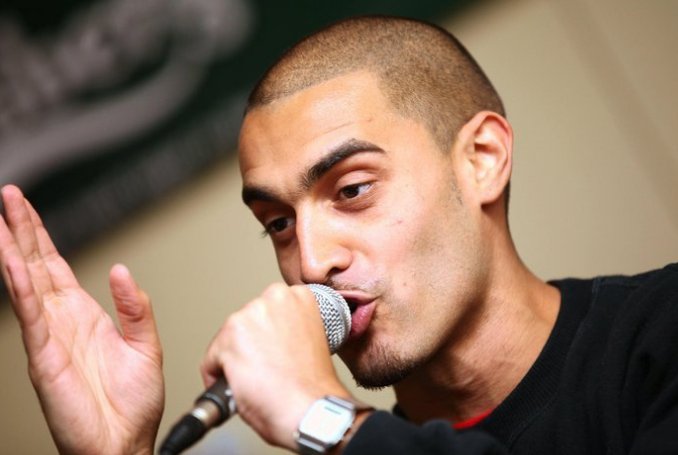 The pro-Israeli group We Believe In Israel wants to shut down UK hip-hop artist, Lowkey, on Spotify. Luke Akehurst, director of and speaking on behalf of the group, recently stated:

“We view [Lowkey’s] comments about globalizing the Intifada as a direct incitement of violence towards Jews and Israelis, while Hasan Salaam [Lowkey’s real name] promotes commonly held and nefarious antisemitic conspiracy theories about Jewish world domination.”

Entirely failing to provide any evidence of this, the group is deliberately framing Lowkey as a hateful propagandist when in fact he’s an exemplary artist, namely one—through his powerful music—fighting for Palestinian justice. In Long Live Palestine 3, for example, he raps:

This is for Palestine, Al-Quds, the capital Jerusalem
Unarmed people marching to the wall and they’re shooting ’em
Suppression is a question, resistance is the answer

That is but one example of the many lyrical salvos that Lowkey has aimed at Israel, undermining its credibility as a “democracy” illuminating its criminality in destroying the lives of generations of Palestinians.

‘We Believe In Israel’ does not want the public to be exposed to this. It not only offends Israel’s image but draws direct attention to its ongoing settler-colonial project. It wants to finish that project by fully eliminating the Palestinian people.

And it wants as much as possible to do that in secret which, frankly, speaks to its sheer stupidity. Unlike in 1948 when the Nakba began we have the Internet now. The constantly evolving technology makes it impossible to control the flood of images—photos, videos, etc.—that exposes the murderous project. (I recently spoke with Professor Rebecca Stein at Duke University about her excellent anthropological work on this.)

Lowkey’s name may itself imply meekness but that, to his credit he is not. He is a serious threat to the dishonesty of Israel, let alone—as revolutionaries tend to be—they’re getting away with it. Indeed when you combine anti-colonial thinking, lyricism and music (in this case hip-hop) you get something that is at once non-violent yet explosive.

Lowkey’s hip-hop in this regard serves a dual function. On the one hand, it is educational. Informed by history and facts on the ground he invites—through lyricism—audiences to see what has been happening in Palestine and the criminals responsible for their needless suffering. As sadly obvious as this is to us who follow the daily news of Palestine to much of the world it is not.

This is not necessarily because they don’t care but on account of the hegemony of Western media, which foregrounds the suffering of others to the exclusion of Palestine. Lowkey wants to rightfully disrupt this force, rendering the otherwise invisibility of Palestinians visible. As he emphasizes in Long Live Palestine Part 1, it is an issue that ought to be of universal concern:

Makes no difference if you’re a Christian or if you’re a Jew
They are just people living in different conditions to you
They still die when you bomb their schools, mosques and hospitals
It is not because of rockets, please god can you stop it all
I’m not related to the strangers on the TV

But I relate because those faces could have been me

The other function of Lowkey’s music is mobilization. Beyond educational, it is emotionally charged, specifically by the righteous indignation that characterizes and is expressed by the artist. This immediately beckons us to act in solidarity with Palestine.

By the same token, Lowkey’s music is never simply for pleasure or entertainment. Further, falling within a larger tradition of protest music (within and outside hip-hop), it asks something us, namely not to stay or remain idle while Palestinians suffer. That may include boycotting Israeli products that fuel the illegal Israeli occupation of Palestine, to which Lowkey alludes Long Live Palestine Part 1:

Every coin is a bullet, if you’re Mark’s and Spencer
And when your sipping Coca-Cola
That’s another pistol in the holster of a soulless soldier
You say you know about the Zionist lobby
But you put money in their pocket when you’re buying their coffee,
Talking about revolution, sitting in Starbucks
The fact is that’s the type of thinking I can’t trust
Let alone even start to respect

Similarly, however, we care about Palestine it must be more the topic of coffee conversation. It must involve strategic political action that aims to liberate Palestine. And this—in contrast to what the mendacious Israeli lobby contends—is not to eliminate Israel. Not antisemitic.

Not a call for the destruction of Judaism. It is opposite every single one of those things. It is instead—in a collective spirit of love and justice—to directly work towards the dismantling of the nightmare Israeli regime, keeping Palestinians in constant and brutal terror. That needs to and will end, whatever the lobby says against us.

We will shut up. And in an age where social media gives us a platform we, like Lowkey, each figurately bear a microphone. It’s to be used to speak against the lobby as it tries to push us back. Purveyors of lies that obscure truth must be regularly taken to task. The world must know that the Palestinian struggle is for justice, not hate. It is militant no doubt but the one that needs to be apologizing is Israel.

Spotify (no pun intend) is on the spot. If it gives in to We Believe In Israel’s wishes it will have shown the world not only does it cower to Israeli political interference but—like We Believe In Israel itself—holds truth in contempt. That it cares more about appearing antisemitic rather than being a company of integrity that refuses to be swayed by liars. Lowkey is making music (and great sound music at that) about Israeli oppression, manifesting, in keeping with the task of the responsible artist, difficult aspects of the world that require addressing.

In the case of Israel, that means holding state and other officials accountable for the ongoing dispossession, extrajudicial punishment (often lethal), illegal detentions, public military humiliation, child abuse, home invasions, rape and sexual harassment—to mention just some of its crimes—against the Palestinian people. And as Lowkey has confirmed he’s not stopping in doing his part here, anytime soon:

“Artists and musicians should never have to fear threats to their livelihood or person for the music they make. We will not be silenced on Palestine, not now, not ever.”

That’s the kind of attitude we need to fight antisemitism too, something can never come from censoring Palestinian voices protesting Israeli oppression. If We Believe In Israel genuinely cares about ending hatred it’ll stop lying about Lowkey and put its disingenuous campaign to silence him to rest.

What the likes of the group perennially fail to mention is that those fighting for Palestinian justice want to eliminate antisemitism too.

This emanates from a deeper impulse to liberate all from hate. Surely this is expressed through and by Lowkey’s music. But it’s also within us. We bring to life, artist or not, anytime we act to free Palestine.