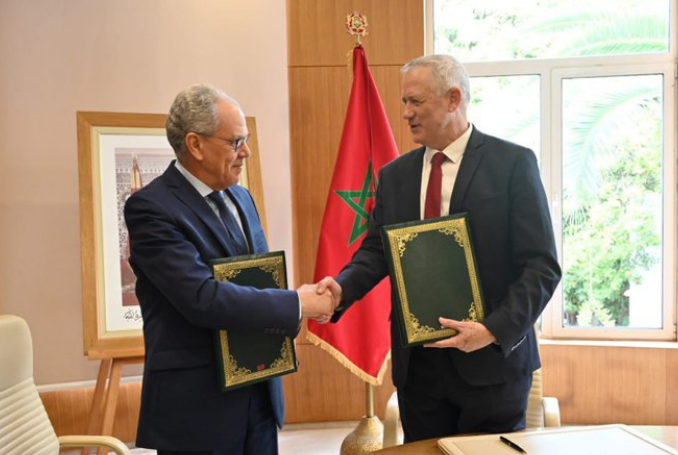 Morocco and Israel signed Wednesday a memorandum of cooperation in the aerospace industry, as the two countries aspire to strengthen their one-year-old relationship after normalizing ties in 2020, The New Arab reported.

The signing ceremony took place in Rabat under the presence of Ryad Mezzur, Morocco’s Minister of Industry and Trade, and Amir Peretz, the director of the Israel Aerospace Industries (IAI) Company and former Israeli Defense Minister.

The agreement will provide Morocco with high-tech Israeli security equipment, as Rabat and Tel Aviv aim to cooperate in operational planning, research, and development in the aerospace industry.

Last year, Israeli Defense Minister Benny Gantz signed with his Moroccan counterpart a memorandum of understanding on security and military training during his visit to Rabat. No further details were shared about the agreement.

Meanwhile, Spanish media reported that Israel is planning to build a military base near Melilla, in partnership with Morocco.

Since normalizing ties with Israel late in 2020, the North African kingdom is pushing for closer economic, political, and cultural ties with Tel Aviv. “Sky is the limit,” asserted Morocco’s foreign minister Nasser Bourita during the anniversary of Abraham Accords.

Rabat and Tel Aviv are now connected through direct flights, cultural activities, and student exchanges. In addition to Israel’s defense minister, Tel Aviv’s foreign and trade ministers both visited Rabat in the past months, as Moroccan officials continue to promise visits to Tel Aviv “soon”.