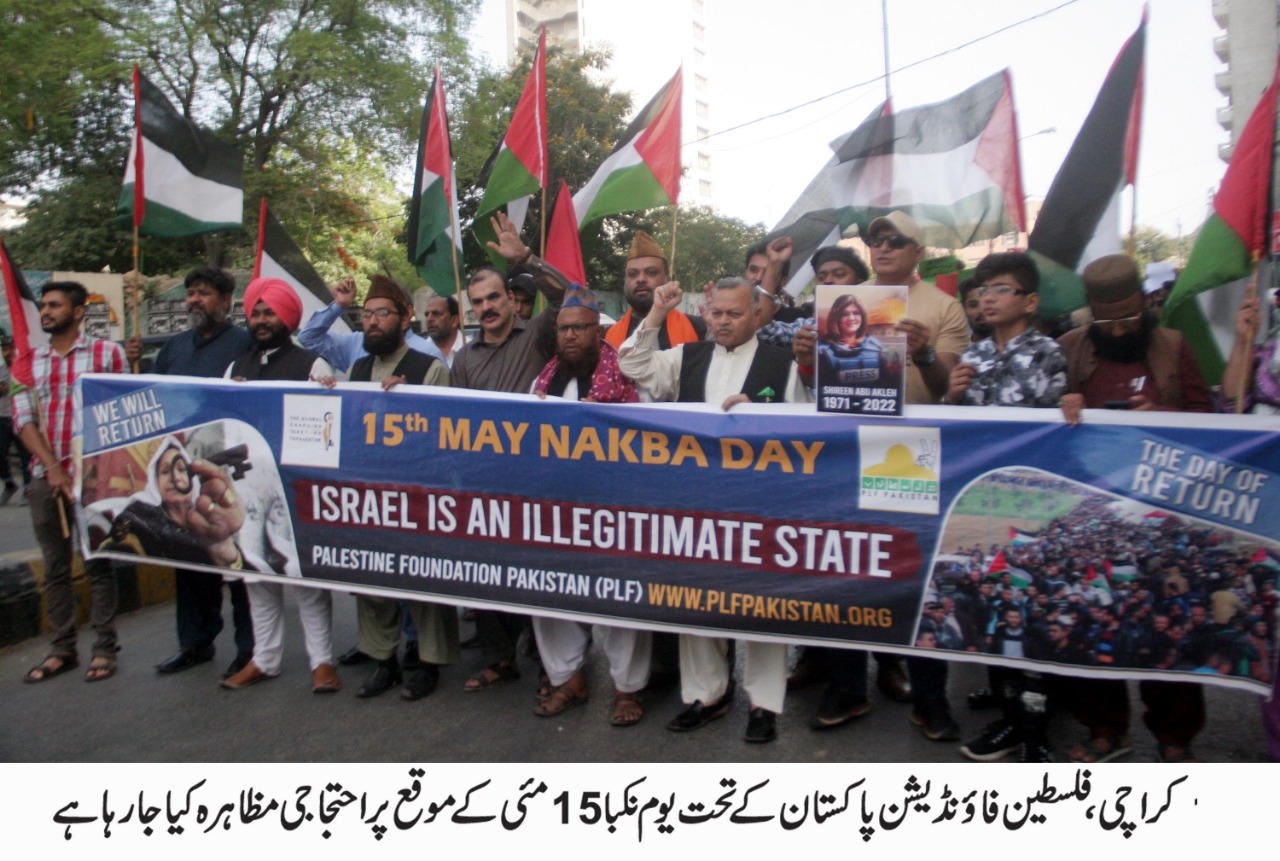 Karachi : (Information Center Palestine Foundation ) on appeal of Palestine Foundation Pakistan (PLF) Nakba Day was observed across the country and a central protest demonstration was occurred in front of Karachi Press Club on Sunday 15th may. The protest was attended by human rights activists and members of civil society, including leaders of political and religious parties, and strongly condemned the seventy four years atrocities of the Zionist occupation of Palestine.

Protesters were holding banners and placards with pictures of the Israel is an illegitimate state, Down with USA, Palestine is the homeland of Palestinians, and the photos of martyred Palestinian woman journalist Shireen Abu Akelh. Protesters also burned American and Israeli flags.

During the protest demonstration , political and religious leaders including civil society of Pakistan and Human Rights organizations express their solidarity with the oppressed people of Palestine and strongly condemn the brutual killing of female Palestinian journalist Shireen Abu Akelh.

They also condemn and expresses their serious concerns over the visit of Pakistani journalist and delegation to the Israeli apartheid entity and their meeting with the Zionist president through coordination the Emirati Sharaka Organization. This visit was headed by Ahmed Qureshi, an anchor of PTV, a state TV channel, who tweeted about the crime of assassinating Abu Akelh, adopting the narrative of the zoinist fake regime of Israel, which tried to attribute the crime to Palestinians.

Leaders call for holding accountable all those involved in the crime of media normalization with Israeli occupation.

They demanded the government to take serious action against all those elements, including Ahmad Qureshi, who had assisted in bringing the Pakistani journalist to Israel. They said father of the nation Muhammad Ali Jinnah categorically stated that Israel is an illegitimate state and Pakistan will never recognize Israel. They raised the question for the Government: who allowed Ahmed Qureshi to visit Israel ? The Pakistani press delegation’s visit to Israel is a clear violation of the constitution of Pakistan, violation against the ideology of Pakistan and Jinnah.