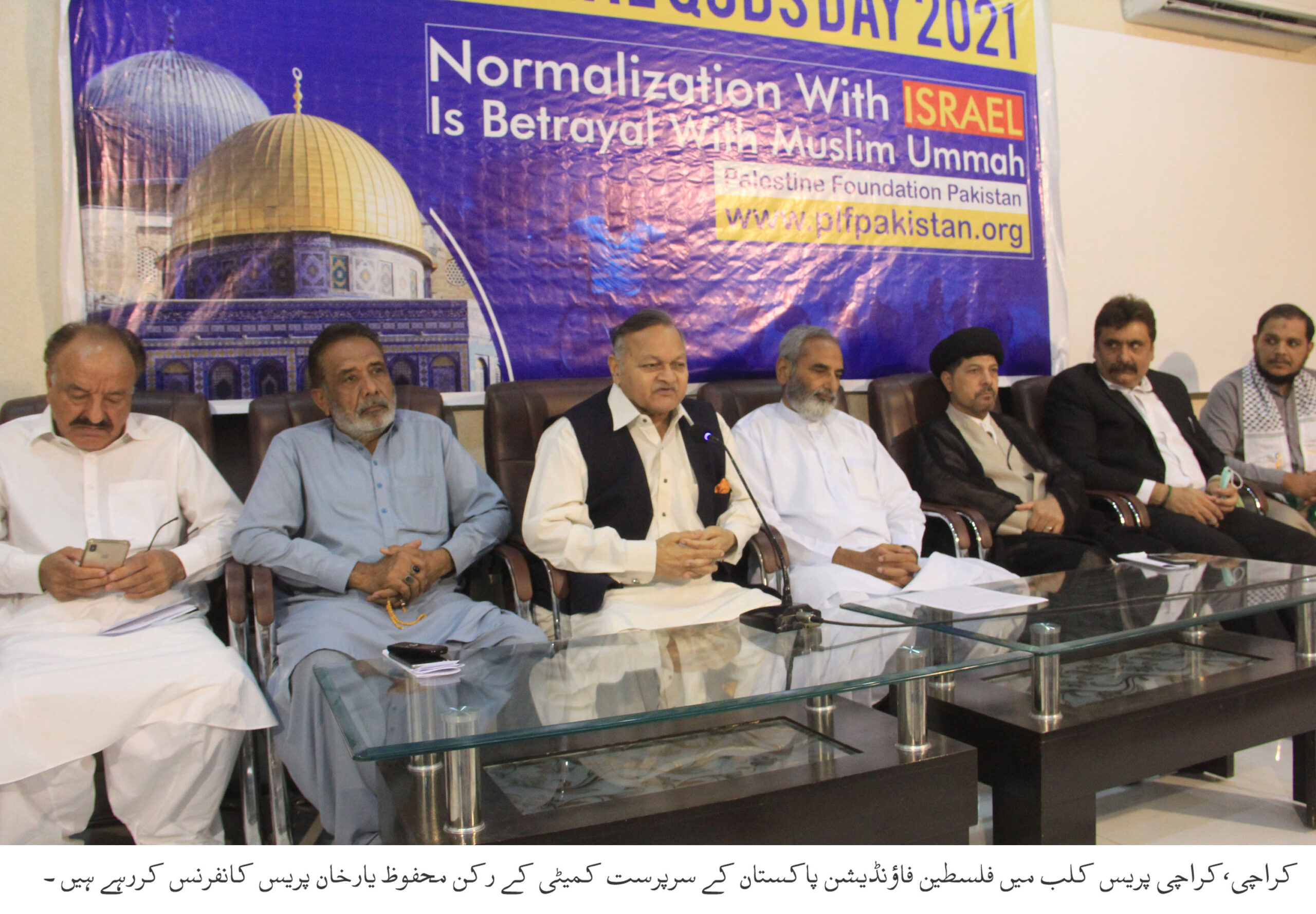 KARACHI (PNIC): The Patron members of Palestine Foundation Pakistan while addressing a press conference at Karachi Press Club on Tuesday said that the issue of Palestine is going through a critical period in its history. Every possible effort is being made to push back the issue of Palestine in the world where many more problems have arisen due to the Corona epidemic. Today, more and more internal and external enemies of Palestine cause are active against it. The USA, Israel, India and their allies are engaged in conspiracies against Pakistan too. The oppressed people of Kashmir have been awaiting for the justice.

Dr. Sabir Abu Maryam, Central Secretary General of Palestine Foundation Pakistan, Mahfooz Yar Khan, Former Member Sindh Assembly, Major (retd) Qamar Abbas, Muslim Pervez, Maulana Baqir Zaidi, Allama Qazi Ahmad Noorani, Israr Abbasi, Arshad Naqvi, Younis Buneri, Pirzada Azhar Hamdani, Matloob Awan, Sadiq Sheikh, Karamat Ali, Erum Butt, Bashir Saduzai and Cecilien James Including others addressed the press conference.
Leaders of Palestine Foundation Pakistan said that, every year Al-Quds day is marked all over the world on the last Friday of Ramadan in accordance with the edict of Imam Khomeini, the founder of the Islamic Revolution. Al-Quds Day is a historical occasion that not only applies to the oppressed Palestinian people, but also speaks for the rights of all the oppressed nations of the world. With this in mind, the Palestine Foundation Pakistan is launching a nationwide campaign on the occasion of Al-Quds Day and Palestine Solidarity, entitled “Normalization with Israel, betrayal Against Muslim Ummah.” The leaders of the Palestine Foundation Pakistan said that under this campaign, programs would be organized across the country.

Under the said theme public opinion would be smoothened against the elements establishing relations with Israel. They said:

They briefed that, an All Parties Conference would be held in Karachi on May 5 while anti-Israel banners would also be hang across the country. Conferences would be organized in other parts of the country including Quetta, Multan, Lahore, Islamabad, Peshawar, Sukkur, Faisalabad and Muzaffarabad in which prominent political and social personalities of the country would participate. They added.

An online webinar of senators, would be held on April 25, chaired by Senator Rehman Malik. On the last Friday of Ramadan, on the occasion of Al-Quds Day, A photo exhibition on Zionist atrocities will be held. They added.
The leaders of Palestine Foundation Pakistan said that a letter has been sent to the President of Pakistan Dr. Arif Alvi and the Prime Minister of Pakistan Imran Khan to mark the last Friday of the ramdan as Al-Quds Day at the official.

They informed;On this occasion, they appealed to the people to follow the Corona SOPs and participate in all solidarity gatherings regarding Palestine, especially on Al-Quds Day. They also appealed to the media owners and the media to include the issue of Palestine in the top priorities and to start special broadcasts on this topic.