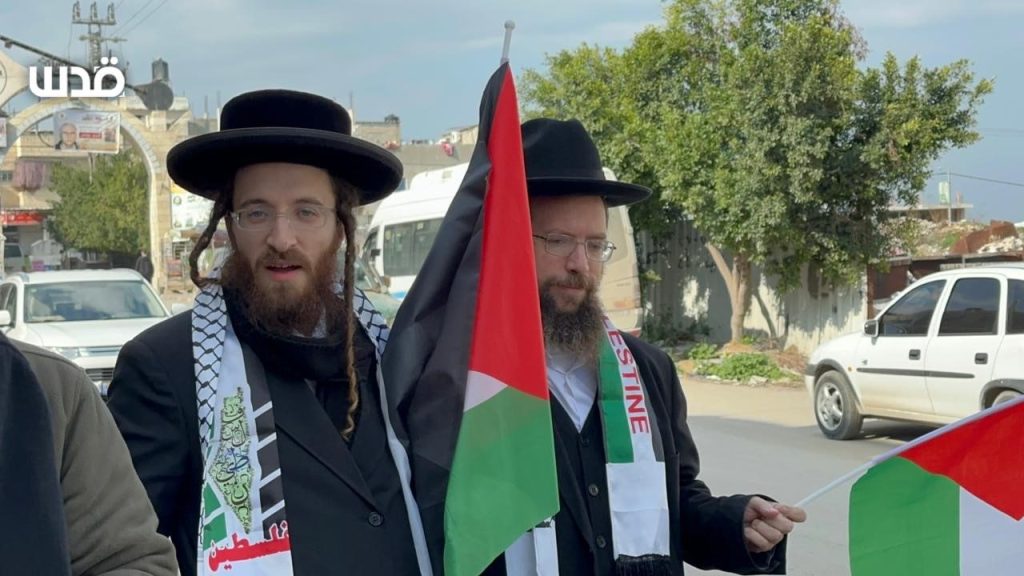 A group of Jews who belong to the ultra-Orthodox and anti-Zionist Neturei Karta group visited on Monday the occupied West Bank city of Jenin and its refugee camp, declaring their support for the Palestinians.

The group activists have repeatedly stayed at the home of the senior leader of the Palestinian Islamic Jihad (PIJ) in Jenin, Bassam al-Saadi, and met with senior PIJ officials.

In addition, the delegation from Neturei Karta met with the secretary general of the Fatah party, Ata Abu Ramila, and the head of the PIJ and former administrative detainee in Israeli jails, Maher al-Akhras.

The delegation met with al-Saadi’s wife as well, and discussed “his steadfastness despite the occupation operations.” They said that the visit to the camp is a symbol of rejection of the Israeli occupation.

Two Neturei Karta members could also be seen walking down the street in Jenin with Palestinian flags and wearing scarves in Palestinian national colors.

One of the members of the group stated that “we are Palestinian Jews, we want to live under the Palestinian flag and not the Israeli flag, in one country which is the Palestinian state. Hundreds of years ago and before the occupation began, we lived together in the Old City of Jerusalem and there was no difference between Jews and Muslims. We all came From one father, Abraham, and we lived happily together.”

“Later, the Zionists came and created pressure to separate us, but we [have rejected] it. We want peace and not the racist Israeli law, which is a threat to the lives of Jews and Muslims. No matter how much time passes, we will continue to stick to our dreams and common goals. We want Palestine with its capital Jerusalem and the Palestinian Authority so that we can live happily.”

Abu Ramila described the group’s visit to the city, saying that “they entered waving Palestinian flags, carrying a message [of] support [to] us, oppose the occupation and annexation and support the Palestinian state.”

Abu Ramila called on the group to continue the struggle and expose the crimes of the occupation, within both the Israeli Jewish community and worldwide.

The West Bank city of Jenin has been the center of Israeli aggressions and military operations last year, with about 50 Palestinians have been killed by Israeli forces.

Israeli National Security Minister Itamar Ben Gvir, a convicted supporter of terrorism, called for this group of anti-Zionist Jews to be deported to Syria in response to their visit.

Created in 1938, Neturei Karta opposes Zionism and calls for a peaceful dismantling of the State of Israel, believing that Jews are not entitled to have their state until the coming of the Jewish Messiah. They live as a part of larger Haredi communities around the globe.