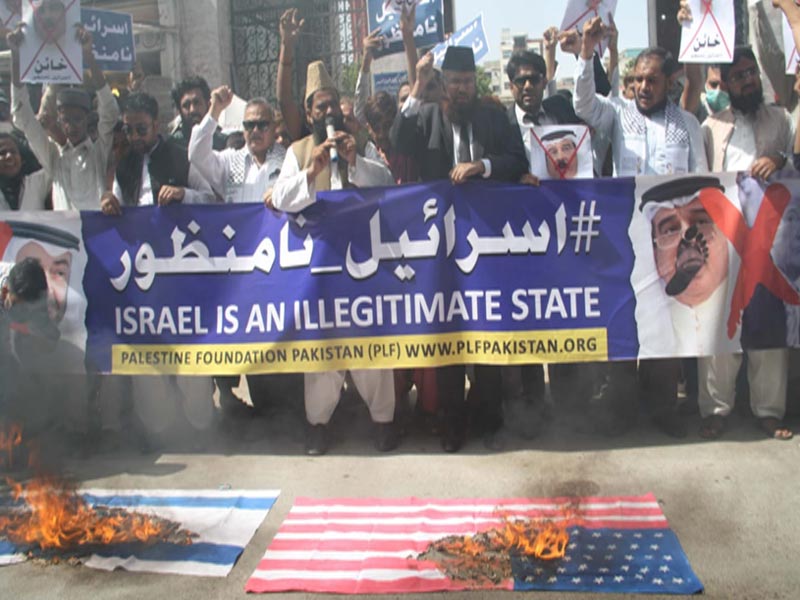 Get normalization with Israel, in simple words, to normalize relations with the Zionist state of Israel, established in the Holy Land of the Prophets, or to establish relations with Israel. At the state level, these relations are called diplomatic relations, which are followed by mutual cooperation and assistance in various state sectors, including trade and defense.

Here, of course, the question must arise in the minds of young people as to why there is so much opposition to relations or normalization with Israel، The simplest answer to this question is that we need to know what Israel really is; Israel is an illegitimate state of Zionists that was imposed on the Holy Land of the Prophets (Palestine) by the US and British in 1948.

Israel is by no means the name of a state that can be compared to other countries in the world. The issue of non-establishment of relations with Israel is further exacerbated by the fact that an illegitimate state whose existence is aggressive and from the very first day of its establishment has been engaged in massacring not only the Palestinian people but also in region. Israel is directly involved in terrorist activities in a number of countries, even Israeli terror foot prints found in occupied Kashmir.

Because the dream of the founders of Israel is to build a greater Israel, which borders from the Nile to the Euphrates. Makkah and Madinah have also been included in the maps. However, the simple answer is whether a thief or a robber who broke into your brother’s house and drove out your brother and all his family members, did you make friendly relations with this thief and robber? Would like to live? This is the thief and robber Israel who has entered the house of our brothers, the Palestinians, and driven them out.
Therefore, friendly relations and diplomatic relations with Israel mean that all wrong and criminal actions of Israel have been recognized.

The Palestinian issue is a humanitarian issue that is of paramount importance in the world. The world’s major powers have shared injustice with the Palestinian people. Their lands have been occupied by Israel.
Palestinians have been evicted from their homes. Above all, the first qiblah of the Muslims, which is considered a symbol of unity among the Muslim Ummah, is still the target of the worst conspiracies of the Zionists. The first qiblah of Bait-ul-Muqaddas is the place where on the night of Ascension the Holy Prophet Muhammad Mustafa (SAW) came here from Masjid-ul-Haram and here at this place he (SAW) led the Prophets (SAW).

Now a days the Zionists are violating the sanctity of the first qiblah. The rites of Allah are being harmed. The holy places of the Prophets are being desecrated. The brutal massacre of the Palestinian people has been going on for over a hundred years. Many wars have been imposed. Israel has also usurped the lands of neighboring countries.
It was Israel that created the sedition like ISIS in order to achieve its nefarious intentions in the region. Despite all these issues and reasons, Al-Aqsa Mosque, the first qiblah of Jerusalem and Palestine has been a symbol of mutual unity and solidarity among Muslims around the world. There are some differences among the Muslims in the world, but whenever it comes to the holy land of the Prophets, Palestine or the first tribe of Jerusalem, the Muslim Ummah seem united and united.

There are many examples of this in the countries of the world that Muslim nations appear united under the banner of Palestine and Al-Quds. Such observations have been made on the territory of Pakistan itself in recent times.
Global colonialism and its evil followers, whether directly in the form of Israel or in the form of European and Western imperialism, are afraid of the consensus and unity that exists between the Muslim Ummah on the issue of Palestine.

Because the unity and solidarity of the Muslim nations is the only weapon that is rubbing the noses of the oppressive and arrogant powers of the world on the ground. Enemies of Islam and Muslims, after being defeated on the battlefields several times in the last few years, have come to the conclusion that the unity and solidarity of Muslims should be shattered in order to fulfill the promises made by Western colonialists to protect Israel. To reassure Israel.

Thus, the enemies of Islam and Muslims have in the past tried unsuccessfully to divide the Muslim nations of superstition by inventing sectarianism, linguistics and unknown slogans, but in recent times we have seen that the Americans and British colonialism and its henchmen have used to create a gulf between regular Muslim nations is the weapon of normalization with Israel.

That is to say, the few governments and rulers of the Muslim world who have already fallen victim to the West and are considered traitors in the ranks of the Muslim Ummah. It is through him that another dagger has been stabbed in the heart of the Muslim Ummah. That is, through the declarations of a few Muslim rulers to recognize the usurper and fake state of Israel, and then the beginning of diplomacy with Israel, they want to divide a voice in the Muslim world on the Palestinian issue. On the one hand, the Palestinian cause is weakened, and on the other hand, the promise made by the world colonial powers to protect Israel can be confirmed.

That is why freedom fighters in every corner of the globe, including Pakistan, see accustoming to Israel as a poison for the unity of the Muslim Ummah and a dagger in the heart.

Today, there is a need for Muslim nations to understand these conspiracies against them. Normalization with Israel is not only a conspiracy against Palestine and the Palestinian people, but if viewed from a different angle, it is tantamount to disenfranchisement of all the oppressed nations of the world as well as hypocrisy among the Muslim Ummah. It is like sowing a seed.

The fact that the rulers of the Muslim and Arab states today have recognized the illegitimate state of Israel by the Zionists based in Palestine clearly means that they have also acknowledged the one hundred years of oppression against the Palestinian people of Israel. Similarly, if we, as Pakistanis, raise the issue of Kashmir at the international level, how can these Arab rulers who recognize Israel support the rights of the people of occupied Kashmir, where the rights of the Palestinians are being violated? At the same time, the rights of other oppressed nations of the world, including the people of Kashmir, are being violated.

In short, the rulers of the Muslim Arab states who have established relations with Israel should take the nails of conscience and unite for the cause of Palestine, realizing these heinous conspiracies of the United States and Israel to create hypocrisy among the Muslim world. There is no doubt that if the Muslim nations of the world work together for the cause of Palestine, Israel, which is weaker than a spider’s web, will not last long in fulfilling its nefarious intentions.