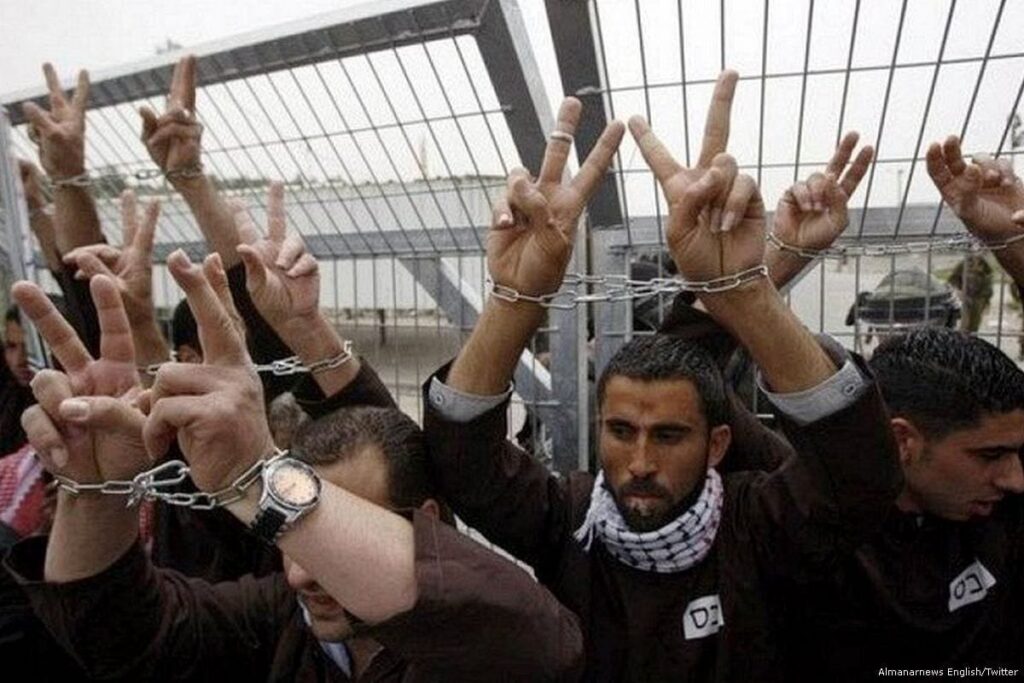 Occupied Palestine – The Palestinian prisoners’ movement announced that 1,380 Palestinian detainees in Israeli jails from across the political spectrum will start an open-ended hunger strike next Friday, 17 September, as a part of a campaign against Israel’s recent repression and attacks of inmates.

The Palestinian Detainees and Ex-Detainees Affairs Commission said that such a step will be taken in protest against the punitive and repressive measures taken by the Israeli prisons’ administration following the Gilbou’s prison break.

The prisoners’ movement said it decided to dissolve all the regulatory bodies of all factions in all prisons, as the commission said.

The Commission said new batches of detainees will join the hunger strike next Tuesday, whereas 100 senior detainees, including Palestinian leader Marwan Barghouti, will refrain from drinking water starting Friday.

Israeli special units and prison administration cracked down on several prisons for five days in a row, including Ketziot’s Section 6 in the Negev and Ramon Prison, in an attempt to disperse some 400 Palestinian prisoners from the Islamic Jihad in a number of other jails.

In response, all Palestinian prisoners held in Israeli jails announced general alarm and insurgency against Israeli laws, in response to the Israeli repression and punitive measures.

The Palestinian prisoners in the Negev and Ramon prisons set fire in the sections of the prisons, as a part of their protest against the Israeli laws.

The occupation authorities also canceled the family visits for the Palestinian prisoners in its jails until the end of September.

Such tensions came after the heroic act of six Palestinian prisoners who managed to free themselves on September 6 2021, from Gilbou prison, a high-security Israeli prison, through a secret tunnel they had reportedly dug beneath the prison.

The six prisoners were identified as:

Mahmoud Arda, 46 years old, from Arraba town in Jenin, imprisoned since 1996, sentenced to a life and 15 years and belonged to the Islamic Jihad movement.

Mohammad Arda, 39 years old, from Arraba town in Jenin, imprisoned since 2002, sentenced to a life and belonged to the Islamic Jihad movement.

Yaaqob Qadri, 49 years old, from Beir al-Basha town in Jenin, imprisoned since 2003, sentenced to a life and belonged to the Islamic Jihad movement.

Ayham Kamanji, 35 years old, from Kufr Dan town in Jenin, imprisoned since 2006, sentenced to a life and belonged to the Islamic Jihad movement.

Zakaria Zubaidi, 46 years old, from Jenin refugee camp, imprisoned since 2019, was not sentenced, and is a former commander of Fatah’s Al Aqsa Martyrs Brigades.

Munadel Infeiat, 26 years old, from Yabad town in Jenin and imprisoned since 2019, was not sentenced and belonged to the Islamic Jihad movement.

Thus, the planned relocation of the prisoners belonging to the Islamic Jihad was part of a set of punitive and repressive measures taken by the Israeli Prisons’ administration following the Gilbou’s prison break.

About 300 of them have been moved so far.

However, four of Gilbou’s six breakers, however, were rearrested by the Israeli occupation on Friday night and Saturday dawn, after five days of large-scale sweep operations throughout occupied Palestine using high-tech systems.

The four who were rearrested are Mahmoud Arda, Zakaria Zubaidi, Yaaqob Qadri and Mohammad Arda, and all now held amid concerns of torture and human rights abuses.

On Saturday, the Israeli court in the Nazareth extended the remand of the four breakers for nine days, and they are now facing a set of charges issued by the Israeli court yesterday, including jailbreak, planning an armed attack, conspiring to escape the prison, and associating with a prohibited organization, according to Commission of Detainees’ and ex-Detainees’ Affairs.

Reports were also said that the prisoners have been tortured and beaten as they are held by the Israeli authorities.

It was reported that Zakaria was transferred to an Israeli hospital to get urgent medical treatment after being tortured and beaten by Israeli occupation forces after they rearrested him.

Yahia Zubaidi, brother of Zakaria, one of the breakers, told QNN, “Israeli occupation authorities refuse to release any information about the health condition of Zakaria and the other 3 breakers of Gilboa prison and prevent them from meeting their lawyers”

On Monday, an Israeli court rejected a petition by the Detainees and Ex-Detainees’ Affairs Commission to allow a lawyer’s visit to the four of Gilbou’s six breakers to follow up the prisoners’ condition and their place of detention.

However, hours later, the court agreed to allow the attorney to visit only two of the four, Mahmoud and Mohammad Arda.